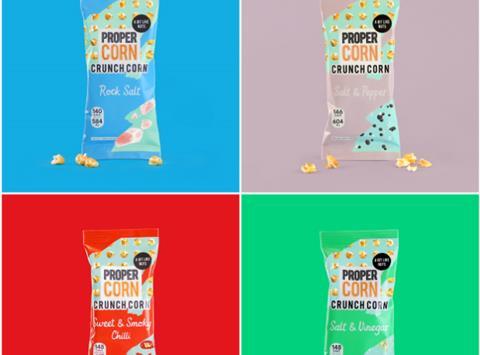 Propercorn is preparing to expand beyond the popcorn category for the first time with the launch of Crunch Corn, a ‘half-popped’ range for the nuts fixture.

Intended as an allergen-free alternative to nuts, the NPD is set roll out nationwide in Tesco next Monday (12 September) in a quartet of variants: Rock Salt, Salt & Vinegar, Sweet & Smoky Chilli and Salt & Pepper. All four flavours will be available in single (rsp: 89p/30g) and sharing (rsp: £1.99/90g) formats.

Crunch Corn is “not traditional popcorn and it’s certainly not a bag of un-popped kernels. It’s a moreish, nut-like crunch that’s totally new,” he added.

It is the first new product from the brand since it confirmed last week that it had received a £7m injection from private equity player Piper and investment vehicle JamJar.