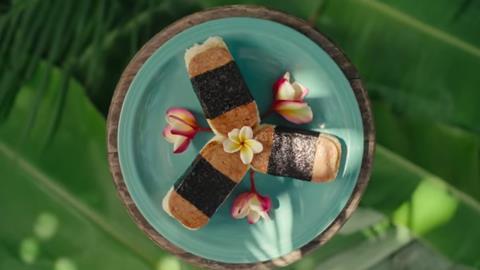 The US is Netflix’s focus for the latest series of Street Food (available now). The locations across the six episodes are predictable – New York, LA, Miami, etc – with one exception.

That is, the Hawaiian island of O’ahu. It looks gorgeous. And so does its food. Lunch trucks and holes-in-the-wall provide a taste of “the soul of Hawaii”, as chef Mark Noguchi puts it.

At the top of most menus, however, is poke, a ubiquitous diced raw fish dish (typically tuna). “Hawaiians eat so much poke, it’s more expensive than gas,” chuckles interviewee Lanai Tabura, who takes a trip to Da Bald Guy.

It’s a popular O’ahu lunch truck where the poke, unusually, is fried – a creation of likeable (and smooth-headed) chef James Martin, who runs the business with his dad, Leonard Nombris.

Their story, the episode’s through-line, is one of tough love, obstinacy, disunity, reconciliation and mutual respect. It’s as touching as their macaroni salad is mouth-watering.

In one way, they’re quite typical of the O’ahu food scene, where a number of parents are shown working alongside their kids. Another example is the Poi Factory, with its mission “to nourish people with the food and the spirit of our ancestors”.