Revealed: Brits will pay more for milk with added benefits

Nutritionally-enhanced milks are starting to gain traction, with the likes of Arla tapping into the trend with Big Milk added-value milk for toddlers. So, just how much potential do these seemingly niche products have? 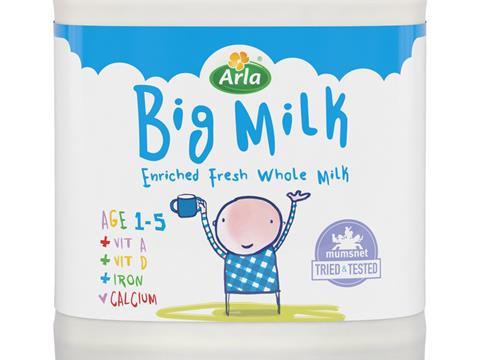 A lot, according to an exclusive poll commissioned by The Grocer, which found that 44% of the 2,035 polled by Harris Interactive would be interested in buying such products for themselves and their families. And, two thirds would be willing to pay more than they do for standard milk.

“Positively, we see 37% of people are happy to put a 5% premium on the price of milk to pay for these extra nutritional benefits which indicates they place a value on an enhanced milk proposition,” says Lucia Juliano, head of fmcg & retail research at Harris Interactive. “In the current situation where milk prices are being constantly squeezed it is refreshing to hear consumers say they are willing to pay more for an improved product,” she adds.

With only one quarter of people refusing outright to consider buying enhanced milk, there’s a lot of potential for growth. But, Juliano notes: “Brands and manufacturers looking to enter this part of the market have a few consumer challenges to overcome, namely making the enhancement process as natural as possible, continuing to support British farmers and communicating the positive benefits of enhanced milk.”

Enhanced yoghurts are also in demand with 9% of those polled saying high protein content would make them eat more, and a further 24% saying less sugar would encourage them to consume yoghurt more frequently. However, price was the ultimate sticking point with 38% of consumers willing to buy more yoghurt if they were cheaper.