Cathedral City back on TV screens with ITV quiz sponsorship 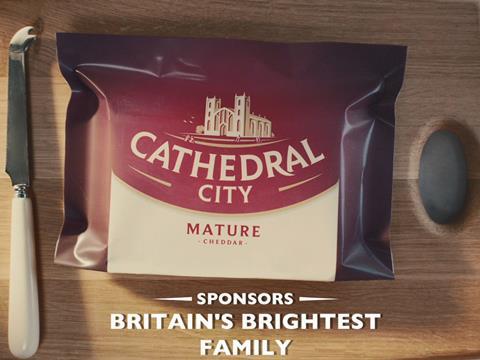 Cathedral City has returned to screens with its first TV sponsorship deal since 2010.

The £1.5m deal sees the Dairy Crest-owned brand sponsor new ITV quiz show Britain’s Brightest Family for the next 15 weeks, with idents airing before and after each episode.

The Wednesday night show, which made its debut yesterday (10 January) is presented by Anne Hegerty - also known as The Chase’s Governess - and eclipsed Dairy Crest estimates of 2.8 million viewers to draw in an audience of around 4.3 million, according to overnight figures.

Cathedral City idents would pose quiz-style questions, the supplier said, while visuals showed family members in a series of “cheese-eating scenarios, from gobbling down bubbling cheese on toast to stealing the crispy bit from the corner of a lasagne”.

“We look forward to showing the British television-viewing public what the Cathedral City brand stands for and are confident that viewers will engage with our tongue-in-cheek idents, helping to further embed Cathedral City in consumers’ hearts and minds,” he added.