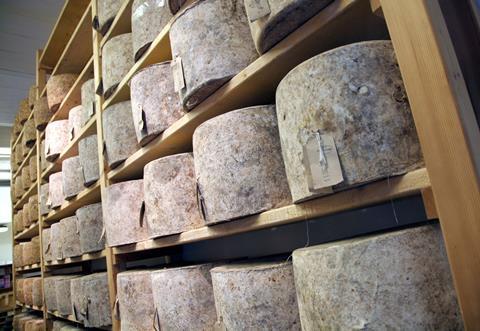 Neal’s Yard Dairy has warned sending mixed loads of goods to the EU is like “playing Russian roulette”, with incorrect paperwork delaying lorries for up to a week.

Small businesses typically rely on ‘groupage’ loads to export their goods, in which shipments from different exporters for different customers are grouped together on one lorry. The practice means paperwork problems with one can delay or even block transport for them all.

A cheese shipment by Neal’s Yard was delayed by a week earlier this month because another company had incorrectly filled its paperwork.

The entire lorry was consequently forced to return to London to remove the one product.

“You’re not just at the mercy of how you fill out your forms. You’re also at the mercy of how other companies on the same container have filled out theirs,” said Jason Hinds, director at Neal’s Yard. “It only takes one certificate to be wrong and the whole consignment is stopped.”

Echoing a recent move by Wyke Farms to act as a ‘cheese consolidator’ for EU exports, Neal’s Yard is now considering renting its own lorry alongside two or three other small cheese exporters to minimise the risk of hold-ups.

But Hinds said this would not happen until Easter at the earliest, when the “true cost” of trading with the EU was better understood. “Once we get used to the new routine and costs, people will start to think about mobilising ourselves in a way that’s more organised. Collaboration is going to be at the heart of that.”

Hinds also suggested EU customs officials at Calais were creating difficulties by inconsistently applying the rules. “They seem to be adopting a changing policy of their applications or interpretations of the new regulations.”

Telford-based cheesemaker Bridge Cheese also reported Brexit border disruption this week. Most of the business’ stock arrives in the UK from Ireland, but confusion at the border has resulted in products often returning back to the depot.

The situation has left the company with cashflow tied up in stock that cannot be delivered to customers or held up at ports.

“It’s not a sustainable way to do business,” said Michael Harte, MD of Bridge Cheese. “We prepared and prepared well in advance of the end of transition, but the fact is that many of our suppliers and customers are seeing the real impact of the last-minute deal and very little support.”

The Road Haulage Association estimated last week that EU exports were down by 68% in January. However, the figures were rejected by the government, which insisted “disruption at the border has so far been minimal and freight movements are now close to normal levels, despite the Covid-19 pandemic”.

Emma Churchill, head of the UK government’s Border Delivery Group, told MPs last week that trade flows had “held up exceptionally well” since the start of the year.