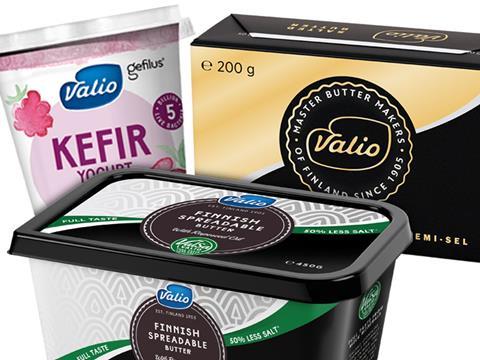 Finland’s largest dairy brand Valio is preparing to launch in the UK and hopes to have products on sale in the mults by the second quarter of 2018, The Grocer can reveal.

Owned by a dairy co-op of more than 5,000 Finnish farmers, Valio got its “foot in the door” in the UK market when it began supplying own-label lactose-free blue cheese, yoghurt and crème fraiche to Tesco earlier this year, said executive vice president of new markets Ross Crittenden.

It was now in discussions with a number of major UK supermarkets over the launch of its Gefilus kefir yoghurts, plus Valio Finnish spreadable butters and Cheddar, and its premium Valio Master Butter Makers butter, Crittenden added.

The brand, launched in 1905, started out as an export vehicle for Finnish butter, and gained particular success among French pastry chefs. It now exports to more than 60 countries, turned over €1.7bn last year, and processes 1.9bn litres of milk a year.

Valio claims to be the only dairy company in the world with Nobel Prize-winning technology after former employee Artturi Ilmari Virtanen received the Nobel Prize for chemistry for his research into agricultural and nutrition chemistry in 1945. The brand said it placed innovation and R&D at the heart of its strategy, investing more than €30m every year in research and quality control. It also licences its lactose free technology to a raft of other global dairy companies.

Crittenden said Valio would launch its “kefir with a twist” in a big pot yoghurt-style format in several flavours, while its spreadable butter used patented Valsa technology, which allowed it to retain the salt profile of standard butter but with half the sodium, using natural milk salts.

The brand’s UK launch would be supported by an extensive digital marketing campaign, while Valio also had plans to open a UK division, once it gained a foothold in the market, Crittenden added.

“We’re excited to bring Valio’s ‘Fresh Finnish Thinking’ to the UK, and have a lot of great ideas we think will be of value to British consumers,” he said. “Our 110-year heritage of craftsmanship and tradition delivers the authenticity and provenance UK consumers demand.”