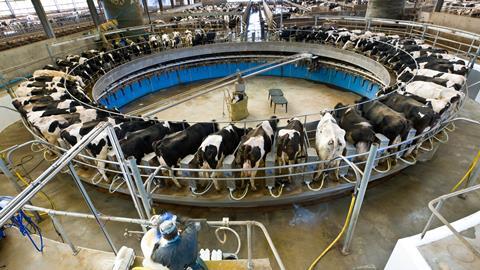 Dairy is hardly the most stable of sectors at the best of times. Over the past 12 months we’ve seen the collapse of one major liquid milk processor in the form of Tomlinsons and a spate of profitability warnings from others, alongside talk of mergers, job cuts and the closure of dairies.

So while fresh milk flew off the shelves during the recent spate of coronavirus-linked panic buying, it should come as no surprise that the dairy sector is now emerging as a major victim of the Covid-19 pandemic.

As The Grocer reports this week, panic buying led Arla to drastically reduce the amount of SKUs it manufactured for the mults in order to maintain continuity of supply.

Meanwhile, Müller has increased its May farmgate milk price by 1p per litre to 27.25ppl on the back of “strong consumer demand”.

But it’s a very different story for already vulnerable mid-market processors, with many struggling with thin margins in recent years - particularly those who supply into the foodservice and hospitality supply chains.

With foodservice making up at least 40% of its business, Freshways warned it was “incurring losses” a fortnight ago as demand from the sector virtually collapsed overnight.

As a result, the London-based processor told its dairy farmers it would drop its farmgate price by 2ppl to 24ppl and extend payment terms from a month to 45 days. Hampshire-based supplier Pensworth followed suit this week when it told farmers they would only get 25% of what they were owed during April.

And with others also exposed to the effective closure of the foodservice category, many dairy businesses and farmers now face an uncertain future.

So who’s being hit and how? And will the industry get the support it needs, or will we witness a further exodus of dairy farmers?

While the plight of companies like Freshways and Pensworth has hogged the headlines, there are “at least another 20 companies in a similar position”, suggests one senior industry source. And it’s an issue Defra is now paying “very close attention to”, they claim.

More specialist cheese and cream makers have also been squeezed out by a focus on essential items by the mults, suggests NFU dairy board chairman Michael Oakes.

The crisis is having “very rapid consequences” for many businesses in terms of cashflow, Oakes says. The NFU estimates “at least a quarter of the dairy industry have been, or could very soon be, affected adversely by this extreme market disruption”, he adds.

Other processors have followed the likes of Freshways by cutting their milk price, Oakes says, including ingredients specialists Meadow Foods and Pattemores, who are now both paying 26ppl or less. Mozzarella manufacturer Dairy Partners has also cut its price, to 25.8ppl, as the once-secure foodservice trade turned into a “basket case virtually overnight”.

And with much of the milk originally destined for foodservice ending up on the spot market - which dropped to the 20ppl mark this week - the situation is leading many farmers to “seriously look at whether they can afford to stay in the industry” Oakes says.

“At those kinds of prices many can’t get out fast enough.” The average cost of production is around 28ppl, he points out.

“Coronavirus is creating these weird haves and have-nots,” suggests another senior industry source. “It’s very different from foot and mouth. It’s not by sector or region. It’s next door farms, with identical farming systems, but one is in the depths of despair and the other is cock-a-hoop. Mrs Jones gets a note from Müller saying their milk has just gone up 1p a litre, and next door who supply Pensworth have seen payments withdrawn.”

At first glance, the current situation should create ideal conditions. On top of soaring demand in retail, UK milk deliveries last month were down 2.5% on the same time last year, according to AHDB’s lead analyst for dairy Patty Clayton.

Milk destined for foodservice only represents eight million litres of production a week, she adds, with 102 million litres produced for retail. But any issues in that market segment “will have a disproportionate impact on some processors”, she says.

Freshways last week secured a new route to market in a deal with Morrisons to sell milk into its wholesale business.

But companies who have lost business from the foodservice channel continue to face an uncertain future, says MD Bali Nijjar. “I expect the milk price to fall even further than 20ppl as the market is flooded by foodservice suppliers. I’ve got an email that says ‘we’ll buy it back at 19p per litre’,” he says.

“Various dairies are losing money because their whole set-up has been hit. We can put people on furlough but we still have the same operating costs, and now even higher distribution costs - the only thing we can do to offset that is by reducing the farmgate price or getting a grant from the government.”

Companies of the scale of Freshways will also struggle to access government loans due to potentially onerous eligibility criteria, Nijjar adds.

Pensworth director Arthur Dunne echoes Nijjar’s comments, saying the supplier had little choice but to reduce farmer payments, given the loss of 30% of its business overnight. It is seeking a new banking facility as it pays 25% of its bills from farmers over four dates in April.

“The potential of another Tomlinsons is a very real prospect”

The company has the security of being “a diversified business” attracting new customers, particularly in the care home and home delivery sector, Dunne says. But, again, accessing government help brings complications, because if Pensworth puts drivers on furlough, it won’t be able to service the distribution channels it operates should staff absenteeism rise.

Ultimately, “the potential of another Tomlinsons is a very real prospect”, says another senior industry source. And with talk of a merger between Freshways and rival Medina still on the cards, we could also see more consolidation.

“We’re not going to run out of milk in the short term,” suggests one source. But there are long-term consequences to the current disruption that will need to be addressed by Defra.

“Will they allow businesses to fall over? Because if at the end of this we lose a critical chunk of liquid milk processing, it will have to be imported,” they add. “We only have 8,500 dairy farmers left. What will they do to keep that business there? That’s the conundrum, and it’s going to require bespoke solutions.”

With food security in such focus, now is precisely the time for Defra to take note.