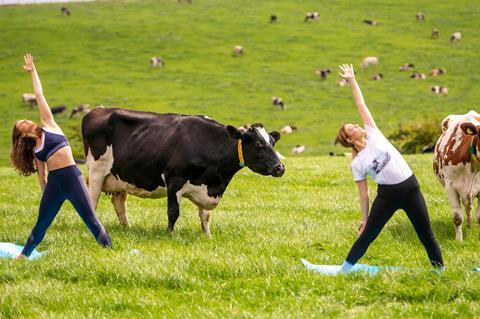 Yoghurt brand Lancashire Farm Dairies has apologised after a publicity stunt for “the UK’s first cow yoga class” backfired and drew criticism from a Hindu cleric.

The supplier launched the class, set against a background of its free-range cows, earlier this month, and described it as “a great way to enjoy the countryside and roam with these wonderful animals”.

Cows were sacred and had long been venerated in Hinduism and should not be used as a “prop for human entertainment”, he pointed out. The “frivolity” of the session also diluted “the profound, sacred and ancient discipline of yoga”.

After citing research that found the amount of physical activity undertaken by UK adults from March to June had fallen by more than a quarter, Lancashire Farm Dairies had pitched the event and its cows as an “unlikely source of fit-spiration” due to the fact they racked up walking distances of up to 10km a week.

Yogis were subsequently invited to Lancashire Farm Dairies’ Rochdale base to practice their yoga poses amid “the grounding of effects of nature, met with the natural sounds and music of the cow comrades”. The visitors were then treated to a Lancashire Farm yoghurt smoothie after the session.

“Real yogis should not attend such events where cows were inappropriately used, causing unnecessary disturbance to cows and putting them in stressful situations,” Zed added, while calling for such future events to be discouraged “before it became a trendy fad”.

In response, Lancashire Farm Dairies said it took the welfare and happiness of its cows “very seriously”.

It added: “All our cows are free-range and spend as much time outside as they want – just as nature intended.

“We hosted an intimate yoga class for six people at one of our farms as a fun way to encourage UK adults to exercise outdoors and experience the tranquility of the vast 500-acre farm. There are no plans to hold any further yoga events.”