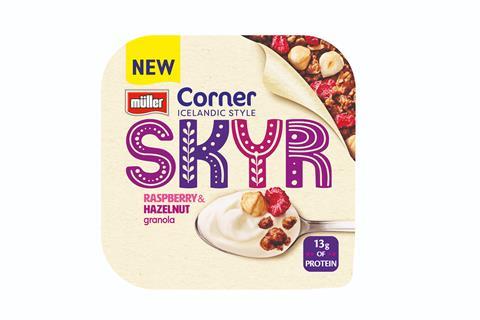 Müller has expanded its Müller Corner yoghurt portfolio with the launch of its first-ever skyr product.

The dairy giant will start rolling out its Müller Corner Icelandic-style Skyr this month in three variants: skyr with raspberry and hazelnut granola; skyr with nuts, chocolate-coated balls and granola: and skyr with banana and almond granola.

The range’s single 180g pots were Müller Corner’s largest, said the dairy giant, and contained 13g of protein each. They also boasted a transparent corner so that shoppers could see its whole nut and granola inclusions.

With the skyr category buoyant and sales up 13% to £31.4m last year [Nielsen 52 w/e 25 January], Müller said it was “confident that by focusing on taste, the product will prove successful”.

The NPD will be available in Morrisons and Co-op in June and Tesco, Asda and Waitrose in July, and will be supported by a multimillion-pound marketing campaign starring brand ambassador Dina Asher-Smith – the first British woman to win a major global sprint title when she won last year’s World Championships 200m. The push will include a new TV ad and social media activity.

“Demand for skyr products continues to grow, and we know that taste is by far the most important factor when choosing yoghurts,” said Müller Yogurt & Desserts strategy and marketing director Michael Inpong.

It follows a surge in sales for the Müller Corner brand during lockdown, with more shoppers buying the brand than at any other point in the past three years.

During the eight weeks to 18 April, volumes for Müller Corner rose by 14% when compared with the previous eight-week period in January and February [Nielsen]. This compared with an overall sales increase of 3% for the yoghurt category.