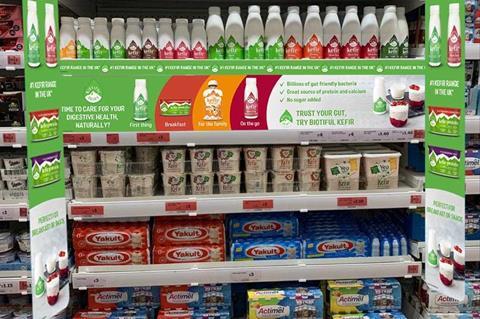 Yakult, Biotiful Dairy and The Collective have all reported anecdotal sales hikes since the start of the crisis

Dairy gut health products have seen a jump in demand since the start of the coronavirus pandemic, according to key players in the category.

Major brands Yakult, Biotiful Dairy and The Collective have all reported anecdotal sales hikes since the crisis hit the UK in earnest.

“We have found demand increases during periods such as the flu season or hay fever season, and this has been replicated during the current pandemic,” said Yakult’s marketing manager Reshma Patel.

“Although price and range are large factors when purchasing, during times like these, motivators such as product trust and scientific credentials become of greater importance for consumers.”

Biotiful Dairy’s founder Natasha Bowes, whose largely kefir-orientated brand consistently draws a link between gut health and boosted immunity, added: “It is undoubtedly a time where there’s a natural draw from the public towards gut health. It’s not surprising that there has been a surge in demand.”

Biotiful’s initial figures showed that in the four weeks to 22 March, its total sales value jumped 47%, while its protein range saw a 188% surge.

Bowes added that she expected penetration of gut health products and frequency of purchase to increase amid “heightened awareness and concern for health” both during and after the coronavirus pandemic.

The Collective also reported an uptick in demand for kefirs. But whilst there was “overall shift towards kefir versus the rest of its range,” according to co-founder Amelia Harvey, there had also been a rise in demand for The Collective’s Gourmet range.

“Sales are up and it may be panic-buying, or people shifting to different packs but we feel that if you’re at home, a nice little treat every now and then is going to cheer your day up,” said Harvey.

“In the last recession, indulgent products did particularly well because when people weren’t eating out, they were ‘treating in’. I could see that being a trend.”

It comes after research by data and analytics firm GlobalData showed consumers in Asian countries hit by coronavirus ahead of the UK had sought out foods associated with gut health and immunity.

“When the effect of coronavirus became prolonged, consumers searched for products that they thought would protect their health in general. An example from Japan is natto, fermented soybeans that have been lacking in stock consistently since the outbreak,” said senior innovation analyst at GlobalData, Mitsue Konishi

“Consumers are more actively buying probiotic products. There will not be natto panic buying in Europe, but probiotic products claiming to improve the immune system are likely to grab consumers’ eyes in the UK, as well as Europe.”