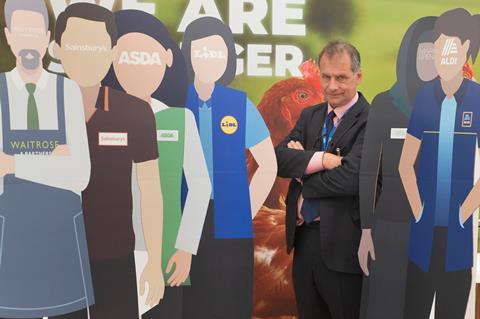 Supermarkets will face egg shortages by the end of the year unless they engage with an increasingly desperate free-range egg sector, producers have warned.

Speaking this week after eight of the UK’s largest supermarkets snubbed a key industry summit, British Free Range Egg Producers Association CEO Robert Gooch said the mults will have to pay more for their eggs or a big majority of its members would go bust.

That’s despite research by The Grocer that found 180 price increases across the free-range and organic egg category in the leading multiples since 21 March [Assosia], compared with just 16 over the same period last year. Most of the hikes ranged from 3p to 15p and were applied to six,10 and 12-egg packs.

Soaring feed costs are tipping free-range producers over the financial edge – with BFREPA research last month revealing 70% of its members would leave egg production within a year if their “ruinous” situation was not resolved.

So BFREPA invited buyers from the retailers to the emergency “breaking point” summit on Tuesday, to hear “what actions they are taking to support egg farmers”.

However, BFREPA “predictably” was met with a no-show from buyers, prompting it to “empty chair” its missing delegates with cardboard cutouts.

“Of the eight invited, Tesco and Morrisons had already met with us to explain how they felt they protected their producers with feed tracker contracts,” Gooch said. Waitrose and Lidl also spoke to the trade body, but Sainsbury’s, Asda, Aldi and M&S declined to engage at all, he added.

Feed trackers were a start, but did not reflect other rising farm costs, Gooch suggested. And until retailers treated their egg producers in the same way they did milk suppliers, by “taking responsibility for what happens down the supply chain” the situation would remain critical, he warned.

BFREPA is calling for a 40p per dozen retail price hike on free-range eggs and an 80p increase on organic eggs, so additional funds can be passed to producers.

While price increases were welcome, soaring on-farm costs were rising at a far higher rate, Gooch explained. The cost of production had risen by 1.5p per dozen to 93.76p in April alone, and the annualised margin per bird was minus £9.96, according to data from consultancy ADAS for BFREPA.

“Without a change in how producers are paid, we will see boom and bust every few years, and that will lead to a shortage of supply with retail prices going through the roof,” he added.

And given how ramping up egg sourcing from Europe was also impossible due to tight supplies resulting from the war in Ukraine cutting off a key supply line for the rest of the continent, he urged retailers to act now.

“What we are asking for is for the retailers to be more responsible and for the contracts [already seen in their dairy, poultry and pork supply chains] to be available for free-range and organic eggs, so that we don’t have to scream and shout every time there is a crisis around feed prices.”