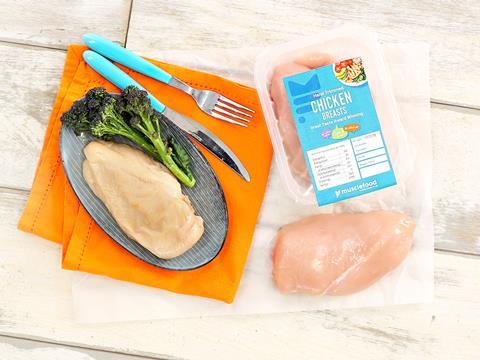 The meat and sports nutrition specialist launched the fresh chicken breasts which “aren’t quite the right shape for supermarkets” last week.

It comes just four months after the retailer claimed a UK first with the launch of its Beautifully Wonky range, initially featuring sirloin and rump steaks in a bid to cut down on food waste.

“As supermarkets require chicken breasts to meet a very specific size and shape to be sold in store, this means that a lot of perfectly good portions are disregarded and processed into calorific chicken burgers, battered nuggets and the like,” said Musclefood.

Its packs contain no added salt or water, while a 100g portion contains 97 calories, 22g of protein and 0.4g of fat.

The site’s founder Darren Beale added: “Chicken, particularly the breast cuts, is one of our most popular products, so after the success of our Beautifully Wonky steaks last year, we decided to launch the UK’s first wonky chicken breast range – offering unconventionally shaped but great quality chicken breast portions at budget prices.

“Once it’s been chopped or sliced and thrown into a delicious curry or stir fry, it doesn’t really matter what shape the chicken breast was to start with – so why do so many cuts get overlooked by the big supermarkets?”