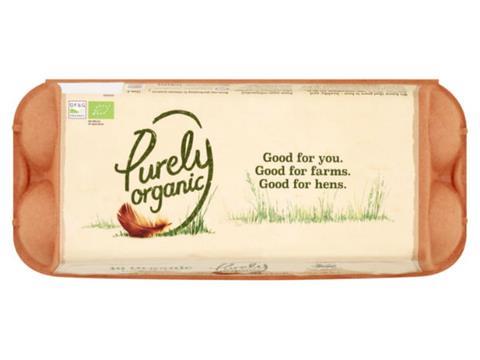 The brand, which made its debut with Nisa in February, has now secured listings in 162 Tesco stores across the country for mixed weight 10-packs (rsp: £2.80).

The boxes of 10 rolled out earlier this week, adding to listings for the six-packs available in Nisa and Amazon Fresh (rsp: £2.10).

It comes as value sales of organic eggs surged 13.1% in the year to 19 August, according to Nielsen, hitting £67.4m as consumers pay ever-more attention to provenance.

Purely Organic eggs were British Lion-approved and sourced from six farms from across the UK, said Noble.

The brand also uses recyclable pulp packaging developed by Hartmann, which offsets emissions generated by production and transport, enabling it to become the first British brand to carry the Climate Partners logo, it said. Climate Partner, headquartered in Germany, supports a range of projects aiming to offset carbon emissions and counts European fmcg brands including Swiss food brand Wander - aiming to be entirely carbon neutral by 2020 - and carbon neutral German honey brand Breitsamer among those carrying its logo.