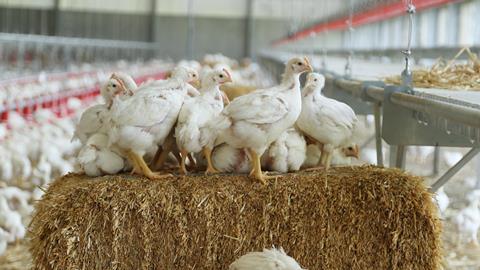 KFC won high praise from animal welfare groups last week after becoming the first major fast food chain in the UK to sign up to the ‘Better Chicken Commitment’ (BCC) - meaning it will meet a new set of minimum standards on welfare by 2026.

It comes amid growing scrutiny on UK supermarket chicken following a string of exposés in the sector. However, M&S and Waitrose are still the only major supermarkets to have signed up to the BCC. So what new standards must signatories meet? And why aren’t other mults making the pledge?

The BCC was drawn up in 2017 by 28 leading animal protection charities from across Europe, including Animal Equality, Compassion in World Farming and The Humane League. It requires signatories to raise their baseline standards of welfare by meeting six requirements for 100% of their broiler chickens by 2026.

Producers must use slower-growing breeds so that chickens’ bodies do not place undue pressure on their legs. They must also provide chickens with at least 50 lux of light; a minimum of two metres perching space; two objects to peck at per 1,000 birds; no more than 20ppm of ammonia gas in their sheds and no caging systems. Finally, maximum stocking density should be 30kg/m² or less.

Signatories must also “comply with all EU animal welfare laws and regulations”, use “controlled” atmospheric or electrical stunning and submit to third-party audits.

The BCC exceeds the standards of Red Tractor, which demand 20 lux and a stocking density of 38kg/m², with no specific requirements for breeds and less stringent ones for stunning. Instead, it is broadly aligned with RSPCA Assured. However, while schemes like the RSPCA’s apply to individual product lines, the BCC covers a retailer’s entire range.

This is great news for welfare, but supermarkets are concerned the higher costs associated with less intensive production would in essence remove the option of a cheaper chicken tier from shelves, and therefore limit ­consumer choice.

“If retailers all signed up to the BCC, there will be an increase in cost and it would reflect directly on to the consumer,” says a poultry industry source.

At Tesco, for example, consumers can currently choose its Organic and Finest ranges, which already meet BCC standards. The rest of its chicken meets four out of six of the BCC criteria, but would not be compliant on maximum stocking density and adopting breeds with higher welfare outcomes.

There are also concerns that introducing yet another assurance scheme would lead to “more confusion and less clarity for consumers”, says the poultry industry source. “There is willingness to follow innovations, but we need to be realistic.”

In any case, industry bodies like the British Poultry Council suggest the high standards of welfare in the UK mean it’s not necessary for supermarkets to sign up to the BCC. “Welfare in the UK is world-class, heavily regulated, science-based, and continually improving,” says public affairs and public relations manager Shraddha Kaul.

Tesco, Asda, Morrisons, Sainsbury’s and the Co-op all say they meet Red Tractor as a minimum, for example, which means maximum stocking densities on supermarket chicken are still well below the EU requirement of 42kg/m².

And some supermarkets claim they are already going further than the BCC.

Sainsbury’s, which says it is the largest retailer of RSPCA Assured products, claims it has a “more effective” approach to regulating chicken welfare and therefore will not be signing up to the commitment. “The way we work with our farmers is different and has been for years and we are committed to high standards of animal welfare,” says a spokeswoman.

“We’ve created a cycle of measuring, managing and continuously improving the health and welfare of our animals, and we believe the results speak for themselves.”

Signing the commitment has proved a marketing coup for KFC, and the charities behind the BCC, but convincing major supermarkets to follow suit is likely to prove a greater challenge.