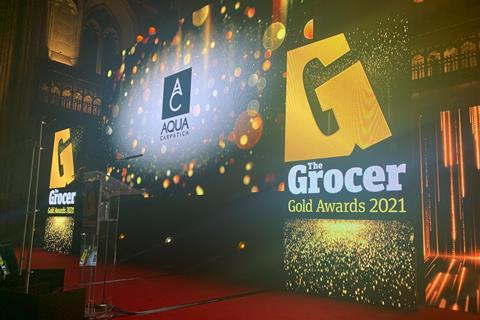 Morrisons crowned a glorious event at the Grocer Gold Awards last night, winning the prestigious Grocer of the Year award for the first time since 2012.

The win follows its £7.1bn acquisition at the weekend by private equity giants CD&R and follows a turnaround that stabilised, diversified and improved the Bradford-based chain.

But it was the thoughtful and all-encompassing response to the pandemic that won our judges over against in a strong field that also included Aldi, Co-op, Iceland and Tesco.

“From supplier payments, and support for British farmers, to discounts for key workers, phone-based box schemes for elderly and vulnerable shoppers, increased online capacity, not to mention its pioneering focus on the safety and remuneration of colleagues, no supermarket worked harder or thought more broadly about the challenges of the pandemic than Morrisons,” said Adam Leyland, The Grocer’s editor-in-chief, and chair of the 48-strong judging panel.

The industry’s heroic response to the pandemic was the dominant feature of this year’s Gold Awards, which were hosted by William Hague at the Guildhall in London.

The Grocer Cup was won by Chris Tyas, the supply chain veteran, for his “calm, firm, thorough and hugely effective role”, as head of the Food Resilience Industry Forum, “in engendering the collaboration that was needed in response to the multiple lockdowns and other supply chain challenges in 2020/21”, said Leyland.

As grocers scaled up online delivery slots at an unprecedented rate, Asda was crowned Online Supermarket of the Year, with the E-commerce Initiative of the Year award won by Sainsbury’s for its industry-leading work to provide support for vulnerable shielding customers.

Sainsbury’s store manager Ben Taw was crowned Store Manager of the Year on the back of the 30% sales growth his store delivered but also his wholehearted support for his team’s mental health.

In depth: All the winners of the Grocer Gold Awards 2021

With shopper needs turned on their heads as never before by the pandemic, Tesco was voted Britain’s Favourite Supermarket again, in a consumer poll conducted by NielsenIQ based on over 7,000 shoppers, and was ranked highest for eight out of 10 attributes on which the 10 major grocers were assessed.

And as stores were reconfigured, to ensure shopper and colleague safety, Waitrose won the customer service award in the Grocer 33 annual competition, with Tesco securing the availability award for the third year running, while Asda won the price award for the 24th consecutive year.

Amid a huge increase in demand during the pandemic the role of factory managers was also recognised, with Brian Jones from the Pladis Wigston plant being crowned Factory Manager of the Year.

On the product side, the impact of the pandemic was also felt. In the case of drinks brand winner Carling, that meant focusing on mental health and support for the pub trade.

Soft Drinks Brand of the Year Moju Drinks played up its health credentials but also bolstered its DTC and e-commerce capabilities. 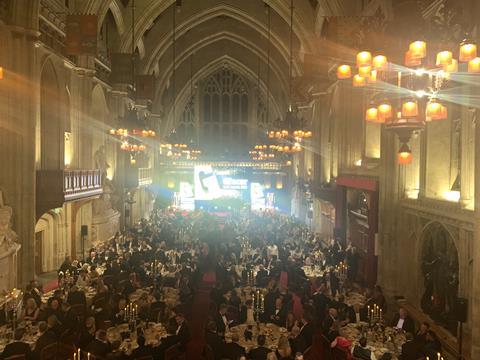 Food Brand of the Year Charlie Bigham’s responded to the lockdown with innovation and increased marketing. Meanwhile, Unilever brought back soap brand Lifebouy after a 35-year absence to seal the Household & Personal Care Brand of the Year.

On the other hand, Petfood Brand of the Year Butcher’s triumphed thanks to a good old-fashioned (but brilliant) turnaround, while the importance of employee engagement in the turnaround of Princes helped it to win the Employer of the Year award.

The scaling up of DTC operations was another notable feature of this year’s awards, with Field & Flower beating off former winners including Hello Fresh and Mindful Chef to win the Specialist Online Retailer of the Year award. Startup of the Year Offblak also achieved stunning growth with the development of a DTC tea service. And a successful pivot into direct consumer supply helped JJ Foodservice not only survive the shuttering of the hospitality trade, but actually grow sales, to win the National Wholesaler of the Year.

Cash & carry wholesalers were clearly in a better position to take advantage of the conditions. But the success of Parfetts, the Regional Wholesaler of the Year, owed much to its foresight in developing and improving its delivered operations. Meanwhile, Specialist Wholesaler of Year was Wholegood for the second time in three years.

Social media was another key ingredient of success for a number of our winners, as shoppers turned to their gadgets for information and entertainment. None more so than SME Brand of the Year, Little Moons, while Entrepreneur of the Year James Sharpe, the founder of My Fabulosa, also used social media to telling effect, while developing his household brand into a household name.

On the export side, Ramsden International showcased its entrepreneurial flair as it ripped up its plan for 2020, which involved focusing on the EU, to find growth in farther flung climes, including Qatar and Kenya, to win Exporter of the Year.

With food waste a key concern in the supply, the Waste Not Want Not Award was won by Company Shop for its inspiring Luminary Programme. And the Sustainability Initiative of the Year award was won by cereals specialist Alara for its Grow Back Greener range.

In a year dominated by supply chain concerns, the Independent Retail Chain of the Year Henderson Retail owed at least some of its success to its foresight in improving its supply chain in readiness for Brexit.

Meanwhile, Franchise Retailer of the Year One Stop was indebted to a brilliant execution of a well-timed new EPoS and demand forecasting system for its win.

Finally, the Supply Chain Initiative of the Year was won by Simply Supply Chain for its Drop & Drive Claims Workgroup.