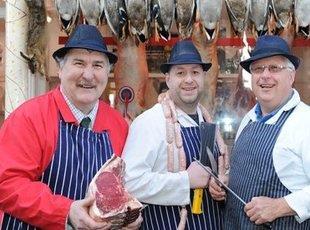 Arthur Howell, Butcher of the Year 2016

Nationwide veg box delivery service Parsnips and Pears has been named one of 12 category winners in the 2016 Farm Shop & Deli Awards.

Now in their third year, the accolades - held in partnership with Olives Et Al and organised by The Grocer’s publisher William Reed Business Media - recognise the best specialist independent retailers in the UK.

Nigel Barden, food writer, broadcaster and chairman of judges described the level of this year’s entries as “outstanding”.

“Judging becomes harder every year,” he said. “I think what stands out the most from the businesses we visited this year was a passion for customer service and continued innovation.”

The winners (see below) were announced at an awards ceremony in Birmingham yesterday [18 April].

DELICATESSEN OF THE YEAR

FISHMONGER OF THE YEAR

CHEESEMONGER OF THE YEAR

MARKET OF THE YEAR

LOCAL SHOP OF THE YEAR

ONLINE BUSINESS OF THE YEAR

FOODHALL OF THE YEAR

GREENGROCER OF THE YEAR

BAKER OF THE YEAR