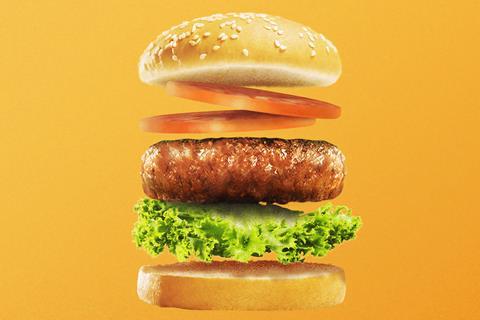 On the high street, the burger war is the longstanding rivalry between McDonald’s and Burger King. Now a different battle of the burgers is taking place in UK grocery as it becomes packed with meat-alternative brands – most with their own take on the classic beef burger. The market is getting extremely competitive, so who’s winning the fight? And how?

Sales: how have sales for meat alternatives been over the past year, and during the pandemic? How have suppliers kept up with demand? Who are the major players? What NPD has been most striking? And which brands have struggled to gain traction?

Other ‘meat’: What other faux meat products are suppliers focusing on beyond mince and burgers? How convincing are they?

Impossible: the Silicon Valley beast has yet to make its UK grocery debut. Will it ever? What could it bring? And how concerned should other brands be?

Outside competition: how have plant-based brands tackled challenges from a resurgent meat industry of late?

Sustainability: just how sustainable is plant-based meat? There seems to be some disagreement over the environmental benefits. What are the opposing arguments, and who’s making them?

Lifestylers: what percentage of the meat-alternative category do they represent? And how have their habits changed during lockdown? Is plant-based meat still seen as a byword for health?

Kantar data: using Kantar commentary, we explain the reasons behind the rise and fall of the relevant sectors.

Nielsen: using Nielsen commentary, we explain the reasons behind the rise and fall of the leading brands.

Innovations: we identify four new products or product ranges that have ideally not appeared in The Grocer before including launch date, RSP and image of each.

Out of home: Burger King has its rebel Whopper; Gregg’s has a vegan sausage roll; KFC has the Vegan Burger. Who’s supplying the products – and which ones are selling best? What other meat alternative goods are available in fast food?