Aldi sales growth slows down to 'only' 22%

The rampant growth of the discounters has been one of the defining stories of 2014, but new figures suggest the budget end of the grocery sector is beginning to feel the effects of this year’s brutal market conditions.

The latest grocery market share figures from Kantar Worldpanel show Aldi and Lidl reached their highest combined market share yet - of 8.6% - in the 12 weeks to 7 December.

At the same time, however, the data also suggests the rapid growth of Aldi is slowing, with the discounter’s growth rate of 22.3% for the latest 12-week period well down on the 36.1% it recorded for the 12 weeks to 27 April. In the most recent four weeks growth slipped again, to 19.8% - less than half the 40.2% growth rate it saw for the four weeks to 27 April.

Meanwhile, Lidl’s sales for the three months to 7 December were up by a healthy 18.3% compared with 16.8% growth recorded for the 12 weeks to 9 November. But in the latest four-week period, Lidl’s food & drink growth was down to 14.9%, a drop of 3.4 percentage points on the 12-week data. 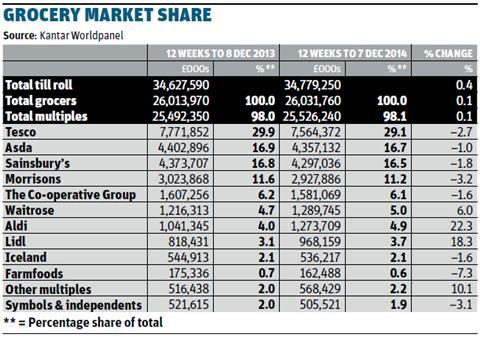 The mainstream supermarket most associated with the value end of the market, Asda, also experienced a slowdown: its sales fell by 1% over the 12 weeks (compared with a 0.2% drop for the 12 weeks to 9 November), ending eight consecutive periods of year-on-year market share improvements. Other value retailers also felt the pinch, with Iceland and Farmfoods seeing three-month sales fall by 1.6% and 7.3% respectively.

Shore Capital analyst Clive Black said: ”the ‘free lunch’ has come to an end for the LADs [limited assortment discounters]”.

”Whilst share gains will persist for some time with new stores, with further price tightening to come by the majors, the virtues of superstores and hypermarkets can be better sold to customers in 2015,” he added”.

“Falling commodity cost and a determined focus on price hasn’t been limited to the big four supermarkets, and lower prices in Aldi and Lidl too have taken the edge of their recent growth rates,” said Fraser McKevitt, Kantar Worldpanel’s head of retail and consumer.

However, he argued there was “inevitably going to be a relative slowdown” as the discounters’ previous growth was “unsustainable in the long term.”

Meanwhile, growth at the premium end of the market continues apace. Waitrose saw sales growth of 6% (against 5.6% last month) and a four-week boost of 7.7% heading into the Christmas period. Similarly, M&S’ four-week food and drink sales were up 4.9%.

“Both of these come on the back of higher growth at the previous Christmas,” Bernstein analysts Bruno Monteyne said. “There is evidence that people are ever more trading up to the quality supermarkets this year.”

The picture is more mixed for the three listed supermarkets, but the figures held encouraging news for Tesco and Sainsbury’s. Although Tesco is still losing market share, its 2.7% sales drop for the 12 weeks to 7 December was less steep than the 3.7% drop it saw for the 12 weeks to 9 November.

Sainsbury’s three-month sales fall eased from 2.5% to 1.8%, though this seemed primarily due to non-food goods as its four-week food and drink sales dropped by 4.1%.

Meanwhile, Morrisons’ 3.2% sales fall for the 12 weeks to 7 December was roughly in line with the 3.3% fall it recorded for the previous 12 weeks.However, the supermarket is up against easier comparators than its competitors as its sales fell by 1.1% in the corresponding period in 2013, while the others were still showing strong growth (Sainsbury’s sales were growing at 4.7%).

Overall, the UK grocery market has returned to marginal growth in the past three months as sales picked up driven by pre-Christmas price discounts. Total grocery sales for the 12 weeks to 7 December rose by 0.1%.

”Falling commodity cost and a determined focus on price hasn’t been limited to the big  four supermarkets, and lower prices in Aldi  and Lidl too have taken the edge of their recent growth rates.

Combined Aldi and Lidl growth peaked at +31% in May this year, so there was inevitably going to be a relative slowdown as that kind of growth is simply unsustainable in the long term.

Ireland provides a useful reference point – Aldi growth of +22% in May 2014 has now fallen to 11%, but such growth rates still win market share, and in a deflationary environment make it difficult for mainstream competitors to grow revenue.

Attracting new shoppers is the lifeblood of any growing brand or retailer, and nearly 1.4 million more households shopped in an Aldi or Lidl in the past three months compared with a year ago.

Discounter’s growth remains balanced between new shoppers, who haven’t visited before, and existing shoppers choosing to move a bit more of their spend towards Aldi and Lidl. This doesn’t suggest the two retailers are dramatically losing consumer appeal, or the pressure on more established retailers will materially ease any time soon.”