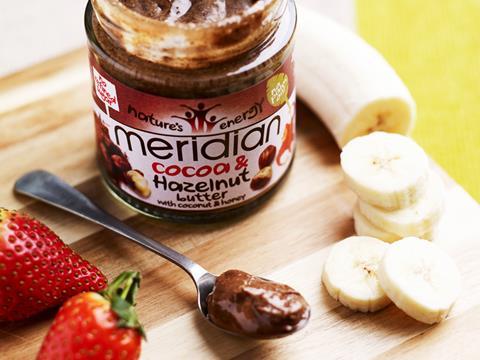 Nut butter brand Meridian has been bought by Northern Irish consumer goods company SHS Group in a deal exclusively flagged by The Grocer.

The value of the deal has not been disclosed but is understood to be in the region of £50m, according to City sources with knowledge of the transaction.

A handful of PE houses lodged bids of more than £40m for the business, but SHS was able to offer a significantly higher price, with a double-digit EBITDA multiple, according to industry insiders.

SHS Group CEO Elaine Birchall said: “The acquisition of Meridian and Rocks strengthens our owned-brand portfolio and manufacturing capability as we continue to invest in bringing high quality brands to a wide range of channels and geographies.”

Grocery news is thin on the ground in the City this morning.

The release of the official CPI and RPI inflation figures from the Office of National Statistics will come later this morning. Market predictions are that the CPI will tick back up to 2.6% in January from 2.5% in December, still comfortably above the Bank of England’s 2% target.

The FTSE 100 has started the week back on the front foot after a torrid period, clawing back 1.2% on Monday to 7,177pts.

Investors appear cautiously optimistic over Tesco’s (TSCO) apparent plans to launch its own discount offer revealed on Sunday, with the supermarket the biggest riser amongst the grocers, gaining 1.2% to 201.6p. Morrisons (MRW) and Sainsbury’s (SBRY) were up 0.8% to 218.5p and 0.5% to 246p respectively.

TATE & Lyle (TATE) was one of few notable fallers, the sweetener producer falling 1.8% to 571.4p, continuing its falls after issuing what amounted to a profits warning last week.