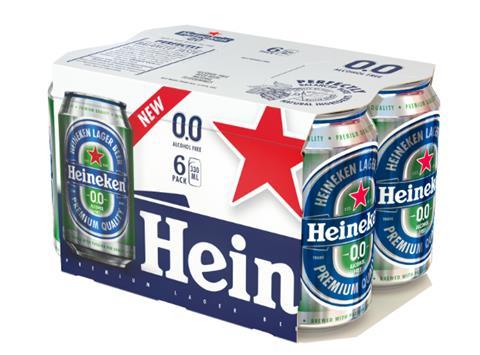 Profits at Heineken have fallen off a cliff as the brewer’s high exposure to the pub trade in the UK led to lower volumes and higher costs during the coronavirus lockdown.

CEO Dolf van den Brink said the first half of 2020 was defined by “unprecedented” challenges, but markets had started to recover in June and July as restrictions lifted around the world.

Operating profits before exceptional costs in the six months to the end of June slumped 53% to €827m, with the bottom line lower in all regions across the world.

But Heineken was hit especially hard in Europe where it runs a vertically integrated business model, including wholesale in several markets as well as pubs in the UK.

Beer volumes in Europe declined 8.5% in the second quarter and the group absorbed higher costs and waived rent payments for its owned pubs.

Operating profits after exceptional costs were down 95% to €85m as Heineken wrote down the value of assets around the world by €548m in response to the pandemic.

CEO Dolf van den Brink said: “The first half of 2020 was defined by unprecedented challenges and I am very proud of our employees all around the world who are adapting quickly to new emerging realities while taking care of each other, our customers and our communities.

“The Heineken brand once again demonstrated its strength with double-digit growth in 14 markets and continued momentum of Heineken 0.0. Our bottom-line was disproportionately impacted due to the decline in the European on-trade, as well as temporary government restrictions on our activities in Mexico and South Africa.”

Heineken withdrew all financial guidance for 2020 given “the lack of visibility” on the end date of the pandemic and the duration of its impact. There has been a gradual recovery at the Dutch group since the trough in April across most markets, but it added the situation continued to be volatile and uncertain.

“We have taken mitigating actions and will further intensify our focus on costs,” van den Brink said.

“Heineken has entered the crisis with a strong financial position, a diversified global footprint, great brands, superior consumer and customer intimacy and highly dedicated and talented teams. Moving forward and as markets recover, we will leverage these unique strengths to chart our next growth chapter.”

Elsewhere it is a quiet start to the week as we enter the typically more sedate month of August.

Following the Heineken half-year numbers this morning, the week continues with another set of results from a giant of the drinks world tomorrow as Diageo reports its full-year figures.

In the US Beyond Meat will post interim results tomorrow, as well as specialist agricultural and distribution business NWF.

On Thursday, we’ll get a sense of how badly the property market has suffered during the pandemic as shopping centre owner Hammerson unveils its interims.

Naked Wine - one of the companies to do well during the crisis - holds its AGM on Thursday, while in the US Post Holdings and Nomad Foods will post earnings updates.