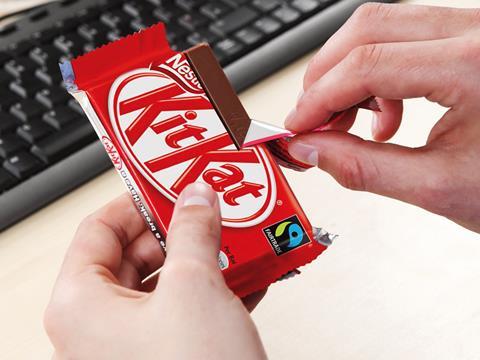 Nestlé has been foiled once again in its long-running bid to trademark the shape of KitKat, its four-fingered wafer bar. The Swiss food company on Wednesday lost its case in the UK’s Court of Appeal, to which it had turned after an unfavourable ruling in the High Court last year. Upholding that decision and dismissing the appeal, the judge said in his ruling that: “Nestlé had failed to show that, as at the date of the application, the mark had acquired distinctiveness.” (The Financial Times £)

The Swiss company has been fighting Mondelez - the US business that has owned Cadbury since a hostile takeover in 2010 - for years over the sweet treat’s shape, arguing it is unique (The Telegraph). The ruling clears the way for competitors, including the major supermarkets as well as other confectioners, to produce their own copycat KitKats without fear of legal consequences (The Guardian).

The Co-op is to test convenience stores at roadside service stations as it considers whether to use a franchising model to expand its convenience grocery business. Launching its own franchised business operation for the first time in its 170 years, Britain’s largest mutual grocery retailer said that it had signed an agreement with MRH, an independent service station operator, to open seven Co-op convenience stores. (The Times £)

Coca-Cola has quietly reduced the sugar content of some of its biggest brands, including Sprite, Fanta and Dr Pepper, without affecting sales, the company’s chief executive has said. The fizzy drinks giant has made a number of reductions in sugar content over the last four years, including a 30% cut in Fanta two weeks ago and there were similar reductions to Sprite and Dr Pepper in 2013 and 2014. (The Guardian)

C&C Group has fallen into the red after swallowing a €129 million writedown on its cider business in the United States. A restructuring charge of more than €17 million for plant closures in England and Ireland was also included as the Magners and Tennent’s owner suffered a €62.9m pre-tax loss. (The Times £)

Inflation caused by the fall in sterling, rises in the minimum wage and higher business rates knocked 10% off pre-tax profits at Mitchells & Butlers, Britain’s second-biggest operator of pubs and restaurants by revenue. The operator of All Bar One pubs and Miller & Carter steakhouses said it was trying to combat rising costs by moving its estate of 1,800 sites upmarket and persuading customers to spend more for an improved product (The Financial Times £). The owner of Harvester, Nicholson’s and All Bar One said the rising minimum wage and fall in the pound have caused profits to slip (The Daily Mail)

The Times (£) asks “Is the party over for food and drink chains?” It quotes Sam Fuller, managing director of GCA Altium, an M&A adviser, who said that with most of the big restaurant brands having changed hands in recent years, their new private equity owners had pushed the accelerator on expansion, much of it outside London. “Towns that previously had relied on pubs and a Costa Coffee now find themselves inundated with pizza, Thai, steak and most other cuisines you can think of,” he said. (The Times £)

Gateau and mille-feuille maker Patisserie Valerie is eyeing further international expansion after the early success of its first overseas store. The cake and coffee chain, headed by former Pizza Express owner Luke Johnson, opened its first store in Blanchardstown in Ireland having previously only been present in the UK (The Telegraph). The boss of Patisserie Valerie has hit out at Labour’s tax-raising manifesto, saying it would be bad for business. Luke Johnson, 55, chairman of the cafe chain, said the key to boosting living standards was to support British enterprise. (The Daily Mail)

Less than 1% of edible surplus food produced by UK manufacturers and farms is being sent to charities to help feed the hungry, according to new figures. (The Guardian)