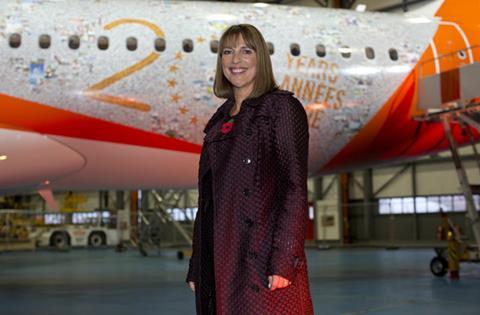 EasyJet boss Dame Carolyn McCall has broken her silence about speculation she was approached to take over from Marc Bolland as chief executive of Marks & Spencer. She said she was not interested in taking the job as she was “really committed” to the airline and would be staying for the “foreseeable future” (The Telegraph) (The Mail).

The news hits the papers just as EasyJet founder Sir Stelios Haji-Ioannou get set to take on the budget grocery sector with the trial of his first easyFoodstore shop. The north London store, which has a range of 76 products, is selling all of its grocery items, including noodle pots, sardines and tinned spaghetti hoops, for just 25p for the whole of February (The Telegraph). The retailer’s slogan is “No expensive brands. Just food honestly priced.” (The Guardian).

The Times prepped itself for the Sainsbury’s/Argos deal with a headline reporting that Sainsbury’s attempt to buy Home Retail Group was on a knife edge as the two sides battled over price.

Bargain Booze owner was celebrating a 38% surge in sales in the first half after its takeover of drinks distributor Matthew Clark doubled the size of the company, The Telegraph writes.

Morrisons sets sights on achieving knock-out blow in supermarket price war as it cut the price of more than 1,000 items (The Mail) (The Guardian).