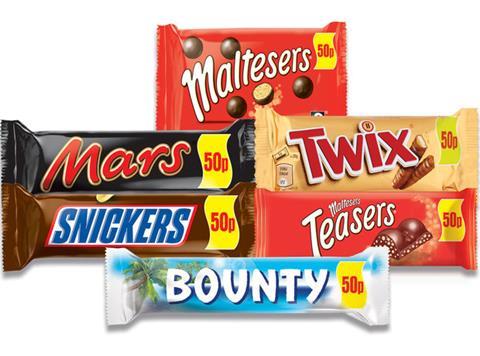 Millions of chocolates were recalled from Britain’s supermarket shelves last night after a customer in Germany found a piece of plastic inside a Snickers bar, writes The Times (£). Mars UK announced that Britain would be one of 55 countries to recall varieties of its products amid fears that they had been contaminated.

However, The FT writes that after initially indicating that the recall spanned 55 countries, Mars later said this was not correct. As some of the products being recalled were sold in duty free outlets it said it could not confirm the exact number of countries. The recall relates to products manufactured at a plant in the Netherlands between December 5 2015 and January 18 2016, and shipped to dozens of countries within the EU and some outside. (The Financial Times £)

The Guardian suggests sales would be lost as a result of repetitional damage, and would be a concern over the short and medium term. (The Guardian)

Elsewhere, Home deliveries of organic vegetables may have once seemed a fad but independent suppliers are helping push sales to within a whisker of pre-recession levels. The Soil Association, the main organic certifying body, said on Tuesday that sales of organic products rose last year by 4.9 per cent to £1.95bn in the UK. (The Financial Times £)

Business leaders’ EU letter adds little to ‘In’ campaign, according to The Telegraph’s business editor James Quinn. Looking at what companies decided not to sign the letter, he writes: “Mike Coupe and Dave Lewis of J Sainsbury and Tesco have perhaps sensibly chosen not to because they lead consumer-facing businesses whose customers would maybe prefer not to know their thoughts on Brexit while buying their Brussels sprouts.” (The Telegraph)

The pound found itself under pressure again yesterday as the vitriolic debate over Britain’s future in the European Union gathered steam. After falling to its lowest level against the dollar on Tuesday since the spring of 2009, sterling was today trading a further half a cent down versus the dollar at $1.410. (The Daily Mail)

Danone has set itself more modest growth targets in anticipation of rising prices for raw materials combined with deflationary consumer trends in Europe. The world’s largest yoghurt maker by sales, which manufactures Activia yoghurt and Evian water, said “volatile and uncertain” conditions would dictate sales growth of between 3-5 per cent this year compared with 4-5 per cent in 2015. (The Financial Times £)