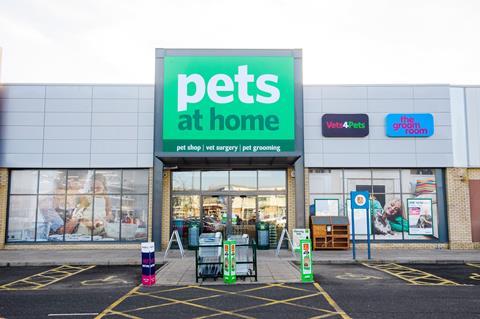 Retailers that paid out dividends after a boost in sales during lockdown are under growing pressure to hand back millions of pounds of taxpayer support after the boss of AO World said that executives “should go and ask their mum if she would be proud” (The Times £).

The chief executive of online retailer AO.com has suggested supermarket executives “ask their mum” about whether they should repay nearly £2bn in business rates relief (The Guardian). John Roberts said Bolton-based AO had not accepted any government help and had returned £300,000 of business rates and furlough support. He said the health crisis was a societal challenge and “businesses should do their bit.

Nils Pratley examines the business rates controvery in his column in The Guardian as Pets at Home joins supermarkets and B&M in opting not to repay rates relief despite staying open during Covid crisis.

A boom in the number of people buying puppies during lockdown has led to a surge in sales and profits at Pets at Home (The Times £).

The retailer, whose ‘essential’ shops have been allowed to remain open throughout both lockdowns, has revealed a 5.1% increase in revenues to £574.4m in the six months to the beginning of October (The Mail).

Pets at Home and AO World have reported strong recent sales, in the latest sign of polarisation in the UK retail sector that has been one of the hardest hit by Covid-19 (The Financial Times £).

A surge in shopping from home has eased the pressure on retailers caused by England’s four-week lockdown and tighter restrictions in the rest of the UK, according to a survey from the CBI (The Guardian).

Meat processing firm Cranswick has recorded a considerable upsurge in demand thanks to people eating at home more often (The Mail).

Diageo, the world’s largest spirits maker, will harness energy from the heat produced by malting barley as it seeks to eliminate greenhouse gas emissions from its operations in the next decade (The Financial Times £).

Patisserie Valerie cakes will go on sale in 250 Sainsbury’s stores next month in time for Christmas (The Telegraph). The deal marks a key milestone in rebuilding Patisserie Valerie, which was embroiled in an accounting scandal in 2018.

There have been cod wars and scallop wars but never a sausage war — until now. Brexit negotiators are engaged in a stand-off over the future of the banger as the prospect grows of a trade ban at the end of the year (The Times £).

The boss of Compass pledged that the giant catering group would emerge from the Covid-19 pandemic “stronger than we’ve ever been” as it returned to profitability in its latest quarter (The Times £).

Catering giant Compass is offering home deliveries as it shifts towards a future where more of its tech office staff work remotely (The Mail).

Rishi Sunak will set out a £4.3bn plan to tackle the threat of mass unemployment as the chancellor braces Britain for the brutal economic fallout from the coronavirus crisis (The Financial Times £).

JD Sports has emerged as the last remaining bidder for Debenhams, as the historic department store chain’s battle for survival nears its conclusion (The Financial Times £).

Up to 60 Debenhams shops could close next year, putting thousands of jobs at risk, as part of a rescue deal for the beleaguered department store group (The Guardian).

More than half a billion pounds was wiped off the value of JD Sports yesterday after it revealed that it was close to a takeover of Debenhams (The Times £).