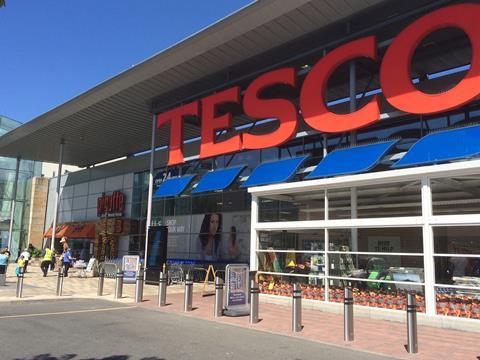 Tesco’s nightmare year has wiped $5bn off the value of its brand, new research has found. The value of one of Britain’s best-known brands abroad slumped by 37% to $9.4bn (£6.1bn) over the past year and has been surpassed by Aldi, the German discounter, according to the global BrandZ report from WPP and its Millward Brown consultancy. (The Times £)

Tesco was ranked as the 17th most valuable global brand only five years ago, but is now no longer in the top 100. By contrast, Aldi’s brand value rose 22% to $11.7bn (£7.6bn), putting it 90th. Traditional retailers such as Walmart, Ikea, H&M and Zara also all slipped down the rankings. (The Guardian)

Applegreen, Ireland’s largest independent motorway service station group, is expected to unveil plans to list on London’s junior market this morning in a float that could value the business at up to €300m (£230m). The company, which has more than 150 sites across the UK and Ireland, is planning to raise €70m in a dual Aim and Irish stock market listing. (The Telegraph)

PayPoint has been accused of treating small retailers in a “deplorable” manner in an escalating dispute over how much commission is paid to shopowners who allow consumers to pay bills using the company’s system. The National Federation of Retail Newsagents is preparing a complaint to regulators over PayPoint after it cut retailers’ commissions soon after many of them had signed new contracts. (The Times £)

Imperial Tobacco can “breathe a big drag of relief” after US regulators cleared its $7bn (£4.2bn) purchase of four cigarette brands from the deal between tobacco rivals Reynolds and Lorillard (The Telegraph). The Lambert & Butler and Golden Virginia cigarette group Imperial Tobacco set the Footsie alight with a gain of 109p to a year’s high of 3393p after the merger (The Daily Mail).

Consumer confidence rose for the fifth successive quarter in the opening months of this year to hit its highest level since the pre-crisis days of 2006, according to market research company Nielsen. The proportion of people feeling now was a good time to spend was also up; at 45%, it was the highest since comparable records began in late 2006. (The Guardian)

A US price war knocked earnings at Ahold during the first quarter of the year as the Dutch grocer battled to increase its market share across the Atlantic. Ahold’s underlying operating margin fell to 3.5 per cent from 4 per cent as it cut prices in the US — which accounts for roughly two-thirds of its business — in a bid to compete with rivals such as Walmart. (The Financial Times £)

Retailers and consumer goods groups are turning to beacon technology in a bid to make shopping in bricks and mortar stores more like ecommerce, as they try to connect online behaviour with offline sales. (The Financial Times £)