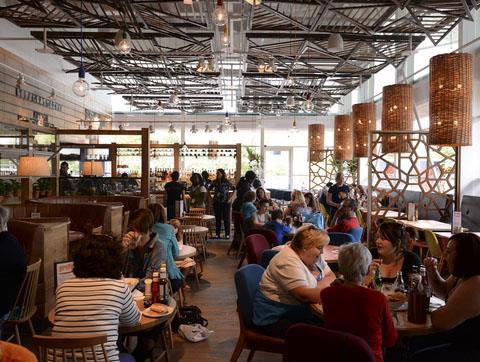 Losses at Tesco’s Giraffe restaurant business have ballooned to £4.1m after it opened new outlets and wrote down the value of some existing sites. Sales at the family friendly chain, which was bought by Tesco’s former chief executive Phil Clarke as part of his plan to make the supermarket’s large stores more exciting, rose nearly 24% to £55m in the 53 weeks to 1 March. (The Guardian)

The FT’s Lex column warns the UK retailers’ “lucky streak” is unlikely to be repeated. It writes: “When rates rise, more spending on mortgage interest will leave less for the high street. UK retailers have done well out of deflation, in large part because of an unusually happy alignment of the stars. The next few years will prove tougher.” (The Financial Times £)

Greene King is shipping 50,000 cases of India pale ale to China following a surge in demand after President Xi Jinping drank a pint of the beer with David Cameron on his state visit to the UK (The Guardian). Greene King shares leapt by over 11% after the pubs group posted surging sales and profits, boosted by its £774m takeover of rival Spirit Pub Company (The Telegraph). The company benefited from better than expected sales in London and the south-east during the Rugby World Cup. (The Financial Times £)

The chairman of British American Tobacco has denied that non-executive directors failed to act over claims that the cigarette maker bribed African officials. Richard Burrows, who has been the company’s chairman since 2009, said: “I can assure you that the board takes very seriously its role in establishing appropriate systems of corporate governance and, through our committee structure, reviewing its internal control systems, governance framework and issues that arise.” (The Times £)

After concerns over lacklustre high street sales on Black Friday and poor fulfilment of online orders The Guardian looks at what lessons retailers can learn from this year’s Black Friday event; including that it’s an online event now and the high street must choose to back it or back out. (The Guardian)

Innovate or die is a closely-held mantra within the consumer goods industries but most “innovations” do not justify the name and are delisted by retailers because of weak sales, according to a new report. Nielsen, the market research group, found that only 18 out of 8,500 new product launches could claim to be a breakthrough innovation. (The Financial Times £)

Marks & Spencer has lost a legal battle against its former landlord BNP Paribas after the Supreme Court dismissed its appeal to return £1.1m of rent it claims to have overpaid. (The Telegraph)

The European commission is to open a state aid investigation into suspected sweetheart tax arrangements enjoyed by McDonald’s in Luxembourg. The Luxembourg tax affairs of Europe’s largest fast food chain have already been subject to considerable scrutiny, attracting a French tax office investigation in 2013 and a critical report this year from a coalition of union groups. (The Guardian)

The pound has dropped to a seven-and-a-half-year low against the dollar as the housebuilding slowdown thwarts Chancellor George Osborne (The Daily Mail). Meanwhile, the price of oil crashes to six-year low as Saudi-led group refuses to reverse its decision to boost production (The Daily Mail).