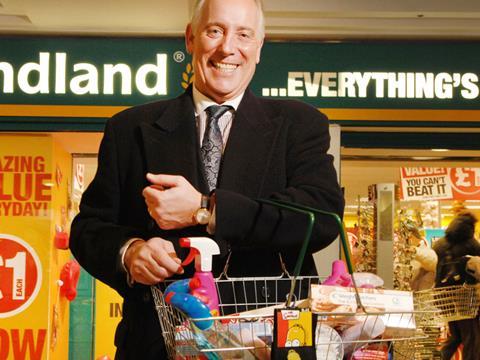 “Poundland boss Jim McCarthy ready to hand over bargain bucket”, writes The Times (£) on the news that the Poundland CEO is stepping down in September to be replaced by Kevin O’Byrne. The Financial Times (£) writes: “Over the past six months Poundland has had a tough time… It has been hit by intense competition and a shift away from shopping on the high street to online buying.”. The Daily Mail says McCarthy is retiring “with his stake in the firm worth about £18million.”

The bidding war for Argos took a twist yesterday when the South African furniture group Steinhoff hoping to snap up the store made a bid for French retail giant Darty, writes The Daily Mail. The Telegraph writes: “South Africa’s Steinhoff International is rapidly sealing its reputation as gatecrasher extraordinaire and notably disruptive figure in would-be corporate celebrations.” The Financial Times’ (£) Lex column says: “Buying Home Retail and Darty, plus the German listing, would tilt it back northwards and back towards household goods. The unifying strategy here, if any, is not obvious.”

The eurozone is back in the land of deflation. For European food groups such as Danone, the French yoghurt maker, and Nestlé, the Swiss chocolate and coffee producer, this is a headache — but also, in principle, a business opportunity. According to a flash estimate this week from Eurostat, the EU’s statistical agency, headline consumer prices in the 19-nation euro area fell 0.2% in the year to February. (The Financial Times £)

A duty cut and the growing popularity of single malts lifted Scotch whisky sales in the UK by 2 per cent last year. About 84.9 million 70 cl bottles of Scotch whisky were released for sale in 2015, up from 83.3 million in the previous year, but still some way short of the 107 million bottles sold in 2005. (The Times £)

Employers can be held responsible for crimes committed by staff at work, the supreme court has ruled in a case involving a Morrisons customer who was subjected to a violent, racist assault. (The Guardian)

Two of the world’s biggest coffee companies, Nestlé and Jacobs Douwe Egberts, admit that beans from Brazilian plantations using slave labour may have ended up in their coffee because they do not know the names of all the plantations that supply them. (The Guardian)