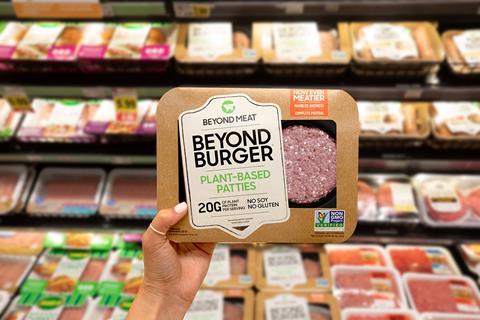 Early investors in Beyond Meat were set for a big payout as the plant-based phenomenon shares became freely tradable yesterday after the expiration of Wall Street’s lock-up. Shares closed down 22%, in what is set to be the biggest test for Beyond Meat’s stock after a record-breaking IPO last May (The Financial Times £).

Despite announcing its first quarterly profit of $4.1m and sales rising 250% to $92m, Beyond Meat shares fell yesterday as it said it would require more discounting as competition increases (Sky News).

Sainsbury’s new chairman Martin Scicluna is plotting a board shake-up which will see Matt Brittin and Jean Tomlin step down from the supermarket’s board next year. Citing City sources, Sky News claims the departures could be announced as early as this week (Sky News).

Marks and Spencer will, from next month, launch a ‘buy now pay later’ service in an attempt to attract younger consumers in the run-up to Christmas. M&S has partnered with Clearpay to offer shoppers the possibility of paying for orders over £30 in interest-free instalments. Rivals such as H&M and ASOS already offer these services (The Guardian).

Under the new partnership, shoppers will be able to delay paying for online purchases, up to £800, for up to six weeks. After paying 25% of the order upfront, customers will have the opportunity to pay the rest in three instalments at no extra cost (The Times £).

Asda has raised the hourly pay of its supermarket staff by 18p from next year, amid a row over new contracts which might see 12,000 workers facing the sack on Saturday. Some workers have refused signing the new employment contract, which despite having a higher basic rate of £9 an hour, eliminates paid breaks and extra cash for working bank holidays and nigh-shifts (The Guardian).

Asda said the “vast majority” of the over 100,000 staff members affected had already signed the contract, with the remaining employees having until Saturday to do so or risk getting fired (Sky News).

Global demand for ketchup has fallen as millennials fell out of love with the tomato-based sauce and started consuming healthier more natural alternatives. Global warming and a trade war between the US and China are also thought to have affected Ketchup sales, which fell by a fifth in Canada, the world’s biggest importer, in the first four months of 2019. Demand also reduced in Mexico, Japan, Saudi Arabia and South Korea.

Turning to Europe, The Netherlands, Europe’s biggest ketchup exporter, has seen demand from Germany fall 23% and from France 12%. The UK however, has consumed around 1.5% more ketchup between January and April, amounting to 33,000 tonnes (The Telegraph).

Harrods is set to open a new standalone 23,000 square feet beauty shop in an Essex shopping centre, changing its historic green branding to pink (The Times £).

Australia’s biggest supermarket chain Woolworths has agreed to pay around A$300m to cover a series of unpaid wages after a review by Pwc discovered that 5,700 employees had not been paid in compliance with retail sector rules, with the issues starting in 2010 (The Financial Times £).