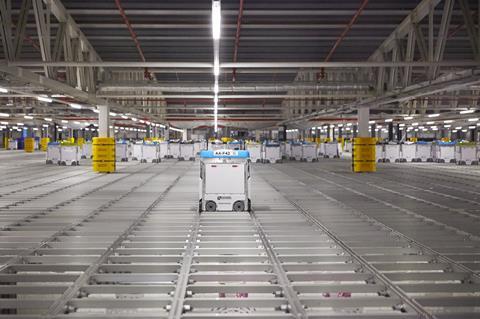 Ocado (OCDO) has this morning announced it has agreed a partnership with Japanese grocery retail Aeon to launch an online grocery delivery business in the country using its Ocado Smart Platform technology.

Aeon is one of Asia’s longest-established retailers and largest retailers, with over 580,000 associates and approximately 100m customers. Aeon operates over 21,000 stores across various businesses, with operations in 14 countries.

The agreement plans for the development of a national fulfilment network to serve the whole of the Japanese market, with expected sales capacity of around JPY600bn by 2030 (£4.3bn), growing to approximately JPY1tn JPY by 2035 (£7.1bn).

Initial CFCs will serve the Kanto region, with the first planned to go live in 2023, to be followed by further CFC capacity over the following two years. By 2025, Aeon expects to have a sales capacity in this region in excess of JPY200bn (1.4bn).

Aeon is expected to commit to further CFC capacity in the period following its first CFC going live. In addition, Aeon will leverage Ocado’s proprietary store-pick software within parts of their existing store network, and offer click-and-collect from selected sites.

Aeon will pay Ocado certain upfront fees upon signing and during the development phase, then ongoing fees linked to both sales achieved and installed capacity within each CFC and service criteria.

This agreement is mutually exclusive in Japan on the basis of Aeon meeting market share targets or ordering an agreed amount of CFC capacity per annum.

Motoya Okada, CEO of Aeon said: “We see Ocado as a state-of-the-art, exciting and transformative partner aligned with our strategy of accelerating Aeon’s Digital Shift to serve Japan’s consumers.

“We will be able to give consumers the convenience and more importantly “time” to let them fulfil other more meaningful aspirations.

“We will forge stronger relationships with our customers by offering a more personalized service driven by the capabilities of the Ocado Smart Platform, coupled with Aeon’s capabilities to curate an exciting and compelling product mix centered around serving the lifestyles of our consumers.

“We will actively partner with Ocado to create a smooth, seamless digital experience thereby speeding up our efforts to reform the online customer experience”

Ocado CEO Tim Steiner said: “I am delighted to welcome another extraordinary retailer, and the first from Asia, to the unique international club of grocers powering their ecommerce operations with Ocado. This partnership marks a major milestone for the food retail landscape in Japan, and I am excited that Ocado will play a key role in bringing ever greater levels of convenience and choice to Aeon’s customers.”

Ocado said the deal will lead to an additional £25m of operating costs in its 2020 financial year, given the extra support costs for Solutions generally and the specific early costs of implementation for Aeon.

Ocado shares have surged 11.4% to 1,346.1p so far this morning, wiping out its losses from early November.

The measure for the general economic situation of the country during the last 12 months decreased by another one point this month to -34, which is now five points lower than in November 2018.

However, expectations for the general economic situation over the next 12 months increased three points to -34, albeit this remains two points lower than November 2018.

Joe Staton, Client Strategy Director at GfK, commented: “In the face of Brexit and election uncertainty, consumers are clearly in a ‘wait-and-see’ mode. The score for the general economy over the coming year has ticked up three points and this is possibly an indication that some consumers believe the imminent general election might clear the Brexit deadlock, even though this sub-measure is still in deeply negative territory at -34.

“The general election is potentially an opportunity to move us out of the doldrums – but for this to happen there must be a clear result. A hung parliament could be very damaging for consumer confidence and would surely deepen the obvious malaise that we see month after month. We have not seen a positive headline score since January 2016 – that’s nearly four years ago.

“Uncertainty is nobody’s friend. So, while many issues are under the spotlight in this election, political parties will need to satisfy voters that they will be effective for the wider economy and that, as a consequence, people will be better off next year and beyond. Consumers need to be convinced they will be able to balance their personal accounts beyond ‘just about managing’. Fantasy economics alone will not guarantee votes.”

Ocado shares were already on the up yesterday, rising 3.6% to 1,208p on the back of its opening a sixth Customer Fulfilment Centre in the UK to support the growth plans of its joint venture with Marks & Spencer, Ocado Retail, and fulfil smaller order sizes and same day delivery.