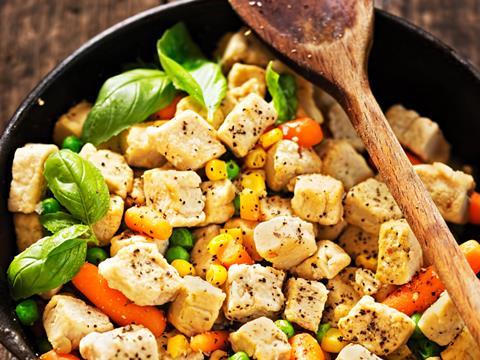 Prices for vegetarian foods have been rising since the end of January and are now up 2% year on year across 233 chilled and frozen SKUs in the mults - to their highest level in three years [Brand View 52 w/e 14 February 2017].

Vegetarian sausages (up 10%), tofu (5%) and bean burgers (3%) are among the plant-based products shoppers are paying more for in the mults than a year ago.

Shoppers are also paying more for own-label meat alternatives, the data suggests. Tesco has added 25p to its own label meat free bacon style rashers, now £1.75, while Morrisons’ own label premium feta, lemon and asparagus croquette (260g) is up 4.7% to £1.57.

Commenting on the price increases, a Quorn Foods spokeswoman said “all pricing is at retailers’ sole discretion”.

“The company’s billion-dollar ambition is grounded in the fact that many consumers are now choosing to eat less meat for a combination of reasons,” it said.

“Whilst health is the leading factor, demand is accelerating due to an increased awareness of the environmental impact of meat production. This is leading to a reduction in meat consumption, and in many cases, to a complete shift to vegan diets, underlined by the growing popularity of Veganuary.”