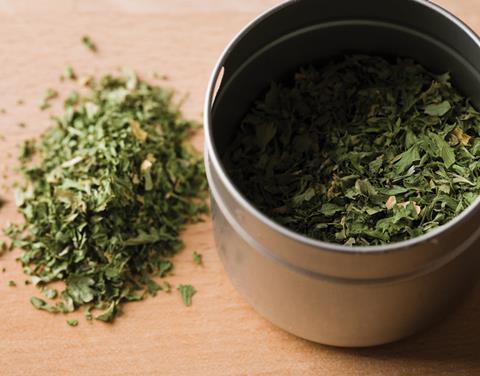 Oregano is the latest ingredient to be in the spotlight over food fraud, with food safety expert Professor Chris Elliott raising concerns over the authenticity of dried herbs and spices on sale in UK retailers.

Elliott - author of the report into food fraud the government commissioned in the wake of the horsemeat scandal - found that a quarter of samples of dried oregano tested contained ingredients other than oregano.

The samples came from 50 UK retailers “across the board”, with 19 of 78 samples testing positive for non-oregano ingredients – most commonly olive and myrtle leaves.

These added extras made up anything from 30% to 70% of products bought from a range of shops in the UK and Ireland and from online retailers. The test used identifies compounds by their atomic composition, using a process called mass spectrometry.

Prof Elliott said: “Clearly we have identified a major problem and it may well reflect issues with other herbs and spices that enter the British Isles through complex supply chains. Much better controls are needed to protect the consumer from purchasing heavily contaminated products.”

Richard Lloyd, Which? executive director, said it was impossible for any shopper to tell, without the help of scientists, what herbs they were buying.

“Retailers, producers and enforcement officers must step up checks to stamp out food fraud.”

Elliott carried out his research as part of the Which? Stop Food Fraud campaign, which is heading towards 40,000 signatories on its online petition calling for authorities to do more to tackle food fraud.

The results have been passed to the Food Standards Agency (FSA). An FSA spokeswoman said: “It is vital that the food people buy is what it says it is on the label. It is the responsibility of food suppliers to test their products to ensure consumers are not being misled.

“The potential for food fraud in the herbs and spices sector is something that the FSA is already exploring following concerns about undeclared allergens in spices earlier in the year.”

The FSA would continue to work with the UK food industry to ensure products were being appropriately tested and correctly labelled. “The results from the Which? survey will be followed up with the UK food businesses concerned,” she said.

A spokeswoman for the Seasoning and Spice Association (SSA) said its members took matters of food authenticity “very seriously” and to ensure the quality and integrity of products, all reputable companies had controls in place to protect themselves and ultimately their customers from fraud.

“The majority of oregano sold in the UK is authentic, as this survey indicates. That some samples have been found to contain large quantities of bulking substances instead of oregano is unacceptable and undermines the efforts of many suppliers to ensure the integrity of this supply chain.

“We are working with the FSA and retailers to ensure that the most up to date knowledge and good manufacturing practices are shared more widely to ensure more companies can identify and manage the risk of food fraud more effectively,” the spokeswoman said.