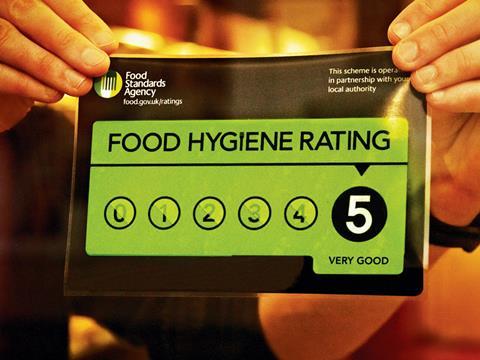 The FSA has published its findings on food hygiene ratings, which the organisation worked in collaboration with Tesco

The Food Standards Agency has moved a step closer to a new light-touch model for the UK’s Food Hygiene Ratings System after publishing the results of a three-month trial with Tesco.

The findings, along with a second parallel trial with pub chain Mitchells & Butlers, were released by the agency this week.

The FSA plans to tap into technology of the UK’s leading food companies and free up cash-strapped FSA and local authority resources to target rogue operators.

The Grocer exclusively revealed in September that the agency had turned to Tesco to trial a new, technology-based model for food safety across England, Wales and Northern Ireland, after describing the current system of inspections as stuck in the past.

The pilots looked at whether audit data collected by food businesses could be used by local authorities to check food hygiene standards and decide ratings under the so-called Scores on the Doors system in the UK.

The FSA said it had worked with Tesco, Mitchells & Butlers, and their audit providers, to test the companies’ own assurance data against the strict food safety requirements that local authorities use to check food businesses are complying with the law.

It said the Tesco study had showed there was “a good degree of consistency between food hygiene ratings given during the exercise and those awarded by local authorities,

“The studies showed that industry data could potentially be used by enforcement officers to assess the compliance of food businesses.”

“However, the studies concluded that further work is necessary to establish how private sector audit data could be used to provide assurance that businesses are complying with food law.”

The FSA used data from Tesco’s second party auditors in 22 local authority areas to see if an FHRS rating could be provided based solely on the stores’ audit data.

The FSA said the study demonstrated that the local authority officers and second party auditors were assessing and scoring compliance in a similar way.

The trials were launched by the FSA as part of its Regulating Our Future (ROF) programme, which looks set to see a major overhaul of the way food regulation, and the protection of customers, is delivered.

“These studies have provided us with a valuable insight to inform our current thinking on Regulating our Future, which is a crucial piece of regulatory reform. The studies demonstrated that data from businesses’ own compliance checks could potentially be used to inform the scope, nature and frequency of official controls,” said FSA director of local delivery Nina Purcell.

“Whilst the studies were limited in scope and were not representative of all food businesses, it was useful to work with both a major national retailer and caterer, which openly provided data for the trials.”

The agency said it recognised there needed to be a “robust” framework for assurance and that this would not be a ‘one size fits all’ approach.

It said the assurance standard of any future model would still be set by the FSA and the new model would allow data from multiple assurance providers, including official controls delivery bodies and voluntary private assurance schemes, to be taken into account.

The FSA would remain the overarching authority with “oversight of the system” it vowed.