Supermarkets back Hubbub plan to double number of Community Fridges 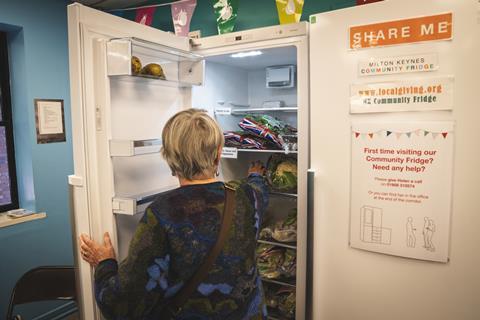 Supermarkets have thrown their weight behind a major expansion of the UK Community Fridge network, in a bid to help tackle food waste.

The charity Hubbub, which runs the network, today announced plans to double the number of fridges to 100 by the end of 2020, funded by a £160,000 National Lottery grant.

It also revealed 20 stakeholders, including major retailers, had agreed to form a coalition to ramp up deliveries from stores to the sites.

The facilities, also known as ‘Solidarity’ or ‘Honesty’ Fridges, allow businesses and the public to donate surplus food for people in need of help, with each fridge on average saving half a tonne of food per month.

They are located in public spaces and open to everyone in the community to access.

Hubbub said talks with retailers had focused on how to ramp up co-ordination of transport, to enable more surplus food from stores to reach the network of fridges.

“We’re thrilled with how successful Community Fridges have been and the rapid growth of the network,” said Trewin Restorick, founder and CEO of Hubbub.

“The fridges not only save valuable food, they help bring people together and have become real community hubs. Some people had doubts at the outset as to whether the Community Fridge network would work, but the fridges have developed to be positive, social spaces that have proven the doubters wrong.

“We’d encourage anyone interested in visiting or opening a fridge to visit our website and we’d love even more businesses to get involved as demand is outstripping supply in some areas.”

“We are proud to be supporting Hubbub, which gives communities the opportunity to learn new skills, and create a healthier and greener lifestyle together by sharing food and reducing waste. Not only will this strengthen communities, but also enable them to thrive.”