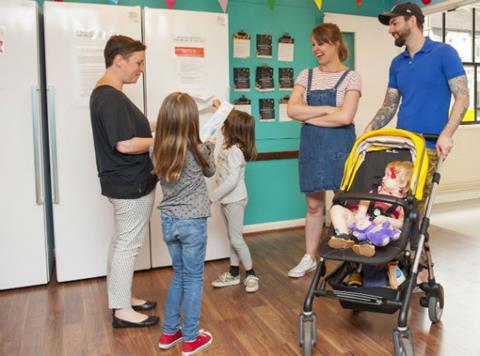 One of Hubbub’s community fridges in operation

Hubbub looks set to secure further supermarket backing for its plan to create a nationwide network of community fridges.

The green charity said Sainsbury’s, which has already committed to help roll out 30 fridges in the UK, was keen to support a new target of 50 fridges over the next 12 months.

There are currently two community fridges in the UK set up by Hubbub, both of which accept surplus food from Sainsbury’s. The first fridge opened in Swadlincote, the test site for Sainsbury’s £10m Waste Less, Save More initiative, and the second is located in Camberwell.

In May, Sainsbury’s named the community fridge as one of its most successful food waste initiatives in its Swadlincote trial.

Restorick said the Camberwell fridge had proven particularly popular, giving out three-quarters of a tonne of food every month.

“These fridges work amazingly well,” he said. “Why they are important is because they deal with food waste at a very local level and redistribute it to people who are most in need in that locality.”

Third-party support is vital to community fridges, which accept surplus food and make it available to the general public. Hubbub helps with the initial set-up of the fridges but relies on community groups to run the sites on a day-to-day basis.

Although some donations come from individuals, most come from supermarkets and restaurants - and Restorick named forming supermarket partnerships as his primary aim.

The fridge network also relies on outside funding, and Hubbub has so far received financial backing from fridge manufacturer Bosch, charity the Rothschild Foundation and the North London Waste Authority.

Restorick said another backer, which did not want to be named yet, had recently pledged £180,000 towards the cause over the next three years.

Sainsbury’s declined to comment on whether it would get more involved in the scheme, but said it was “delighted” to support the community fridge network. “At Sainsbury’s we have a long-established network of local charities who receive donations from our stores, and being part of the community fridge network means we are now able to support with fresh food as well,” said Sainsbury’s head of sustainability Paul Crewe.