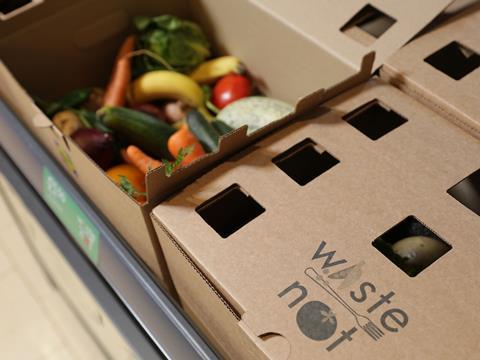 Lidl has begun selling slightly damaged fruit & veg at a discount in a bid to cut food waste.

Produce “no longer at its perfect best but still perfectly good to eat” for reasons such as light bruising will be sold in 5kg boxes for £1.50 as part of the discounter’s Too Good to Waste trial.

The initiative is set to roll out at 122 selected stores this week ahead of a potential national rollout, with the boxes sold each morning from 8am until 10am, after which time any unsold produce will be donated to charities.

If the trial were to be rolled out across Lidl’s estate of 710 stores, the boxes could potentially save some 10,000 tonnes of surplus produce a year, the retailer said.

“Proportionately, we sell the most fruit & veg in the sector, but we know from our data that fresh produce is one of the biggest contributors to food waste in stores,” said Lidl UK CEO Christian Härtnagel.

“We’re excited by the difference our Too Good to Waste initiative will make,” he added.

“Not only will it help customers consider items they might have previously dismissed, it will also provide an opportunity for them to make ­further savings.”