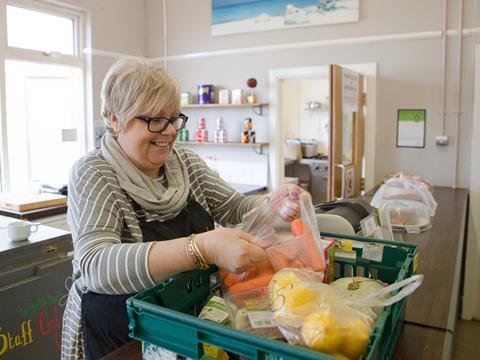 M&S has been given the green light to roll out a trial that could significantly increase the amount of surplus food they redistribute to charity.

The retailer has had approval from local government authorities to extend a trial freezing chilled food on the day it reaches its ‘use by’ date to keep in stores until redistribution charities can collect.

Trialled in three London stores from October 2015, the scheme allows ready meals, meat and fish to be frozen between store closure and midnight to ensure it doesn’t go to waste. It is then relabelled with a new ‘best before’ date one month from freezing and kept in a designated area of the store freezer before collection by London charity City Harvest.

“By proving the concept that chilled foods can be safely frozen for redistribution, M&S can now work towards expanding the variety and amount of food they can redistribute, not only reducing food waste but also saving charities money,” said director at Wrap Dr Richard Swannell.

The roll out comes as the FSA and redistribution experts Neighbourly announced today (6 July) a review of guidance on how date labels should be used on food at a cross-industry event on food waste attended by Wrap and major UK food retailers.

The review will explore whether any improvements in food safety labelling and guidance, or better education around it, might increase the volume of surplus fresh food donated and used by the voluntary sector.

Dealing with fresh and chilled food surplus continues to be a major challenge for charities, according to a survey also published by Neighbourly today.

Although 95% are keen to accept more fresh food, 37% of charities say they lack refrigeration capabilities, according to the research, while 33% need better funding, and 29% a more regular flow of food donations.

“Food surplus redistribution is a win-win for society,” said leader of the Neighbourly food programme Steve Haines. “But we need to address the huge gaps in both capability and capacity.

“We need to help these charities and community projects get whatever is needed - whether that means funds, volunteer drivers to deliver food, consistent food donation supply, or the right tools and infrastructure - in order to better serve those in need.”