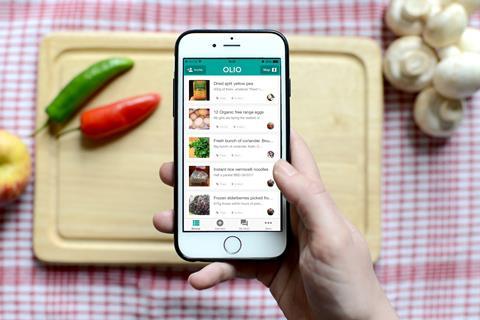 Use of the app in a trial resulted in over 10,000 of items of food being shared

Sainsbury’s is set to widen its partnership with food waste app Olio after over 10,000 items of food were shared in a six-month trial in two small towns.

Nearly 1,300 residents of Swadlincote - the Derbyshire test site of Sainsbury’s £10m Waste Less, Save More food waste initiative - and nearby Burton have downloaded the app to pick up surplus food from local branches.

The scheme works by using volunteers to upload pictures of food left over from the six participating Sainsbury’s branches - food that has been through the markdown process and is not accepted by local charity partners - on to the app. Users can select the items they want and pick them up from a drop box at their local Sainsbury’s branch.

Olio co-founder Tessa Cook said the partnership with Sainsbury’s had been “very powerful” in attracting users and increasing use of the app, which runs independently in large cities including London, Bristol and Cardiff.

Sainsbury’s is now looking to take the initiative to more sites as it ramps up its Waste Not, Save More campaign to 110 more communities. And Cook revealed she also was in talks with other large retailers about launching similar partnerships.

Cook said the app ensured supermarkets did not waste “micro quantities” of food not suitable for charities.

“There are only certain foods that charities can take and there are only so many bread products they can take,” said Cook. “Unfortunately there’s still quite a lot left over.”

Debbie Clark, Waste Less, Save More manager for Sainsbury’s, said the Olio app had been “a really exciting success story” from its food waste initiative.

“Its simplicity is the key to its success, connecting local people to share food they can’t use, and thousands of items have been redistributed as a result. An added benefit in Swadlincote is that the app has encouraged people to try new foods and get creative in the kitchen with their new ingredients,” she said. “As we move into the second year of the Waste Less, Save More project, we’ll be encouraging many more customers up and down the country to download the app and give it a go.”