Indies are developing an obsession for in-store concessions, as brands such as Subway, Greggs and Starbucks set their sights on the convenience retail market.

Subway currently has 350 concessions in c-stores and forecourts across the UK; Greggs has more than 65 in travel and other convenenience locations; Starbucks EMEA president Kris Engskov told the 2015 ACS summit that c-stores were a focus for the company.

So what are the benefits, challenges and risks for retailers considering giving over valuable floor space to another brand?

For Conrad Davies, a Spar store operator in Pwllheli, North Wales, the benefits are clear. “Having Subway within our c-stores has opened up a whole new customer base for us; the strength of the brand is tremendous and is a real draw for younger customers and families in particular,” he says. “We’ve seen a very positive turnover increase.”

Subway’s UK partners include Londis, Nisa and Budgens. In April, One Stop announced its first Subway concessions – one within a franchise store on Evington Road, Leicester, and the other within its company-owned sites in Burton Latimer, Kettering. More are on the cards. 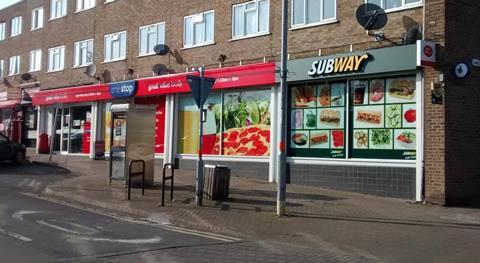 So long as the fit is right, says One Stop franchise director Andrew King: “For other stores looking at the opportunity, we’d recommend they consider whether their location would suit a food to go concession, whether they have high levels of transient footfall to support it and a lower level of similar competition in the surrounding area.”

Given the investment required, this is essential. ”Overall, the cost of putting a subway in is around £120,000, give or take,” says Chris Ward, whose Spar outlet in Milford Haven has a Subway concession. He says the investment is paying off, adding a new dimension to his business as people take advantage of the seating and free WiFi.

“It’s relatively easy as long as you have the financials in place and are happy to go to Subway University, which is in Cambridge. You need to make contact with your local development agent and start the ball rolling. I think there is a requirement for a 30% liquid capital investment from you, the rest can be done by lease and so on.”

Gregg’s is also adapting its offering to target c-stores. At the end of 2014 Greggs had 45 franchised shops operating in travel and other convenience locations, with partners including Moto, Euro Garages, Blakemore Retail and Applegreen. It continues to see this as a route to further growth, having opened a further 20 in the first five months of 2015.

“In 2015 we plan to enhance the customer experience further by continuing to improve our service offering, shop environments and locations, rebalancing our estate towards new convenience catchment areas, with help from our franchise partners in travel and other convenience locations,” says a spokeswoman for the brand.

Blakemore Retail has teamed up with Greggs to trial franchise offerings at three of its Spar stores in Scunthorpe, Telford and Fairfield in Louth. Having seen success through a partnership with Subway, Greggs was added to the portfolio in the hope that the well-recognised brand will add further value.

Filling its forecourts with brand franchises from the likes of Subway, Greggs, Starbucks and Burger King has been central to Euro Garages’ strategy. The business saw sales surge 47% to £646m last year and climbed three places up The Grocer’s Top 50 Independents list to number five.

Blakemore Retail has teamed up with Greggs to trial franchise offerings at three of its Spar stores in Scunthorpe, Telford and Fairfield in Louth. Having seen success through a partnership with Subway, Greggs was added to the portfolio in the hope that the well-recognised brand will add further value.

Subway is banking on more retailers following Blakemore’s lead and teaming up with brands. “We are seeing a great deal of demand for Subway stores within convenience stores and forecourts due to their simple operations and minimal space and equipment requirements,” says Subway area development manager Greg Madigan .

“Non-traditional development continues to be a key area of focus for the Subway brand – we experienced a significant level of growth in 2014, which we are looking to replicate in 2015.”