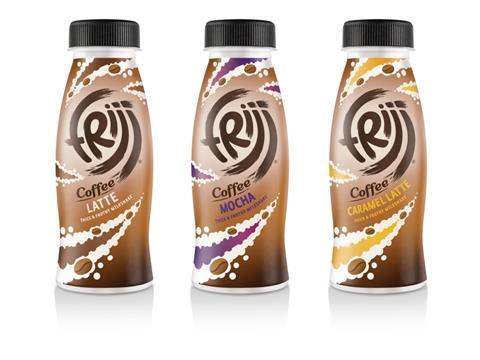 Dairy Crest is embarking on a major push into RTD coffee, with the launch of a three-strong chilled coffee range under its Frijj brand.

Frijj Coffee comes in latte, caramel latte and mocha variants (rsp: £1.30) and goes on sale in Tesco on Monday (24 March). Listings with other retailers will follow over the coming weeks.

Unlike the core Frijj milkshake range, which is sold in 471ml bottles, Frijj Coffee will be available in smaller, 220ml bottles, like other chilled RTD coffee products.

Frijj head of marketing Rachel Moffatt said Frijj Coffee would deliver a “unique thick and frothy coffee milkshake experience,” which would be a key point of difference. “The great personality of Frijj will bring some fun to a relatively serious sector,” she added.

Frijj has dabbled in coffee-flavoured drinks before, launching a limited-edition caramel latte under its Frijj the Incredibles range (since rebranded to Frijj Supreme) in 2012. But unlike Frijj Coffee, which is made with Colombian coffee, that product was simply coffee-flavoured and did not contain any caffeine. Frijj is the biggest flavoured milk brand, worth £52m (IRI, 52 w/e 1 February 2014).