Irish mushroom producers set to move production to the UK 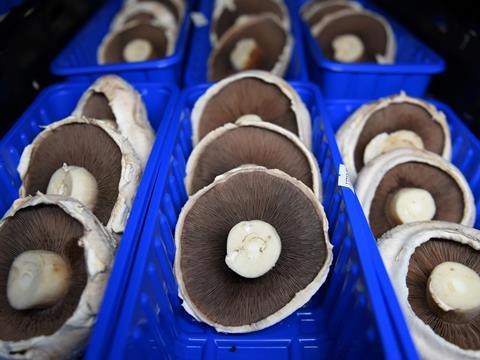 Irish mushroom producers could be forced to move production to the UK to counter the impact of the post-referendum weak pound, one of the country’s largest growers has warned.

Mushroom producers must “reinvent themselves”, said Walsh Mushrooms MD Padraic O’Leary, who is planning to expand his farms in the UK over the next two years. “In the likelihood the UK leaves the EU we will probably grow more produce in the UK,” he said. “But the big challenge on that front would be available labour.”

Walsh is Ireland’s second-largest mushroom supplier to the UK market and supplies several of the mults. Other Irish producers would follow its lead, as there was strong and growing demand in the UK - which imports 60%-70% of its mushrooms, said O’Leary - with some 40% of that percentage coming from Ireland.

O’Leary’s comments come amid warnings over the long-term future of the Irish mushroom sector, with four producers having already gone out of business due to the effects of the weak pound on margins.

Others have warned Irish food businesses are holding off on investment decisions following the Brexit vote.

“A lot of mushroom producers are trying to hold on until next spring,” said Irish Farmers’ Association spokesman Pat Farrell. “Supermarkets have not yet increased their farmgate price and they probably won’t until March or April when contracts come up for renewal.”

But despite several farms closing and prices squeezing producers, shortages of mushrooms were not yet expected.

“I don’t think there are going to be supply issues,” said Donal McCarthy, CEO of the CMP co-op, “But there could be if growers have to continue supplying product below the cost of production for poor returns.”