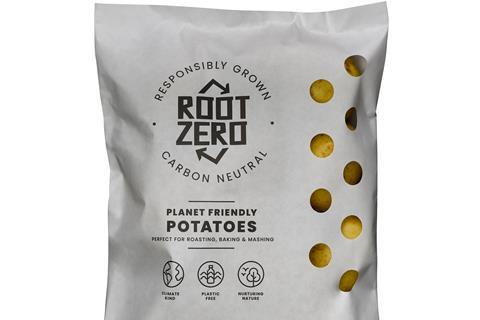 The potatoes will go on sale in The Co-op next week, with further supermarket listings expected to follow

The supplier, which owns the Blas y Tir veg brand, will launch its Root Zero potatoes into 200 Co-op stores across the UK next week (rsp: £2.50/2kg), with further supermarket listings expected to follow over coming months.

The potatoes are grown in Pembrokeshire and certified carbon neutral through a combination of carbon offsetting and the use of “sustainable farming practices to remove carbon dioxide, create healthy soil and increase local biodiversity”, Puffin Produce said.

The business has measured every contribution to the potatoes’ carbon footprint, from the power used on the farm to the transport used to take Root Zero potatoes to  supermarkets, down to the energy used by customers to cook their spuds at home.

Based on the findings from the footprint assessment, Puffin Produce has set a target to further reduce the carbon intensity of Root Zero potatoes by 51% by 2030, covering emissions across the entire supply chain.

The grower has also committed through the Science Based Target Initiative to a company-wide 1.5°C target to reduce its operational emissions by 46% by 2030.

It said the investment in offsetting projects – through two specialist organisations, 3Keel and Climate Partner – would neutralise all currently unavoidable carbon emissions, until such a time it reached its emission reduction goal.

The offset projects include schemes which cut emissions as well as removal projects which absorb greenhouse gases. The supplier said it would offset 586 tonnes of CO2 equivalent for every 1,000 tonnes of potatoes it sold, representing 10% more than the company’s carbon footprint.

Root Zero will also be sold in 100% plastic-free paper bags, which the company has calculated will prevent more than five and a half tonnes of plastic arriving on supermarket shelves.

Innovations in water-based inks and a special adhesive technology makes the paper bag fully recyclable. It can then be reprocessed back into high quality paper, and is also reusable for storing other vegetables and completely home-compostable.

“The food system contributes up to 30% of global greenhouse gas emissions,” said Puffin Produce CEO Huw Thomas. “We have to act now – so we’re on a mission to become carbon neutral and farm in a way that protects and regenerates our land, plants and wildlife.”

Such a move “wasn’t easy”, Thomas added. “We’ve engaged the best scientific advice and partnered with organisations who are helping us to measure, reduce and certify our impact. And we’re also sharing what we learn along the way – with farmers, producers, retailers and customers – so that we can all have a more positive impact on the planet,” he said.

“We are hoping that Root Zero will be the first of many carbon neutral, responsibly grown, sustainably packaged products that will start to tackle the huge impact of the food industry on climate change.”

Other initiatives designed to reduce the supplier’s impact on the environment include growing new varieties of potato which do not require storage at low temperatures, using more fuel-efficient tractors and electric cars and moving towards 100% green electricity use from 2023.

Root Zero will also be generating its own green energy by installing solar panels at its production site and wind turbines on its farms.

Additionally, it is promoting biodiversity through initiatives such as planting healthy, mixed rotations of cover crops which sequester carbon, and creating a new biodiversity woodland and has invested in a nearby undersea restoration project to plant new seagrass meadows.