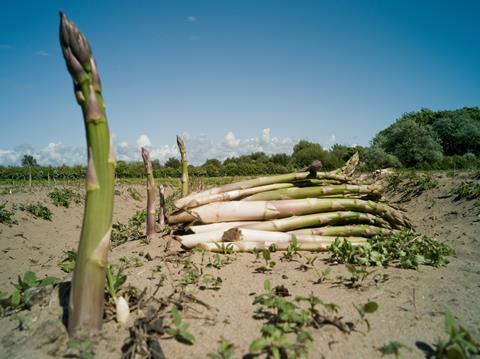 Early spears of asparagus could be on the cards

February’s consecutive days of record-breaking heat could lead to high volumes of fruit & veg hitting shelves over a shorter season, growers have warned.

The sunny conditions are causing top fruit to develop at much faster rates than usual at this time of the year, meaning they could be well ahead of schedule come the end of April, said British Growers Association CEO Jack Ward.

However, there could be problems with supply later in the season if the weather changed, he warned. “It’s not out of the realms of possibility to have frost and snow into April, which would cause quality issues.”

Meanwhile, early spears of asparagus could also be on the cards. “By planting these products sequentially, it tends to allow us to lengthen the season and meet demand gradually, but the warm weather creates worry about a glut in the middle,” said Ward.

“What we don’t want to see is a couple of weeks where high volumes hit shelves on promotion, then after that, we’re struggling to meet demand.”

While creating concerns in some sectors, the dry and fine conditions have made for easy planting of onions and vining peas, which are on schedule.

It comes in stark contrast to conditions this time last year, when the ‘Beast From The East’ forced growers to issue warnings of smaller planted areas and delayed seasons due to flooded and frozen fields.

However, with snow forecast in some regions of the UK next week, it was too early to tell how the season would play out for a lot of fresh produce items, said spokesman for the British Leafy Salad Association Dieter Lloyd.

“Leafy salad growers are keeping their plantings under glass for the time being, as they’re not strong enough to withstand frost just yet.”