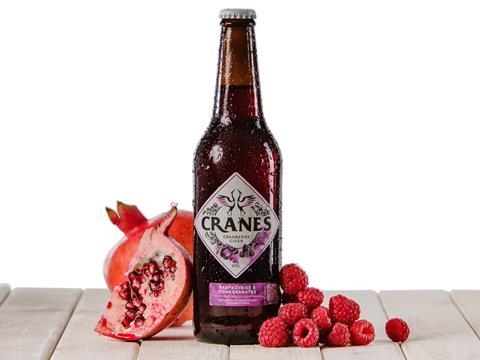 A cranberry cider and liqueur start-up is seeking £150k from the crowd as it looks to increase supermarket listings after signing a distribution deal with Asda.

Cranes, a producer of flavoured cranberry-based cider, has returned to the crowd after raising £194k in 2016 to grow the business.

The firm, which also makes a cranberry & blood orange liqueur, is seeking £150k for 4.8% of its equity in a campaign valuing it at £2.9m.

It plans to use the cash to boost marketing spend, invest in on-trade sales and distribution, increase working capital and grow production.

Cranes is also looking to increase its retail stockists, adding to its launch in Asda stores in June.

The craft cider, which is also marketed as having 30% fewer calories than leading competitors, is currently on trial with Morrisons and stocked by Wyevale Garden Centres.

The firm hopes its launch with Asda can lead to new supermarket stockists following the investment campaign. It is also plans to seek export growth following a positive 2018 in the UK, looking at potential markets including Australia.

In its Seedrs campaign, Cranes set out its aim to be “one of the top three leading brands in both the fruit cider and fruit liqueur UK markets”.

Ben Ritsema, co-founder of Cranes with twin brother Dan, said: “We’ve gone from strength to strength. About a year and a half ago we did our first crowdfunding campaign. We had an original target of £95k and overfunded to £190k.

“Now we have the new campaign, and are launching with Asda in June. On the back of all this we are having to raise some more money to enable us to create larger batches and for working capital.

“The £3m valuation is based on the contract with Asda. As long as we get the gross going with Asda and we get the sales, others may look to us. And then once we have nailed the UK we look at other export markets as well.”