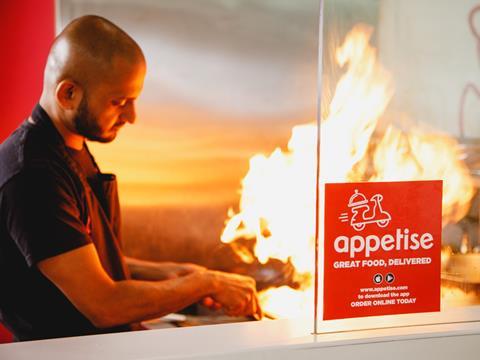 Bergen acquired the business, founded by three students at the University of Warwick in 2008, in 2016

Online takeaway service Appetise has turned to the crowd to raise £500,000 for a battle against Just Eat, which dominates the £7bn market.

The business, backed by New York fund manager Bergen Capital and former Arsenal MD Keith Edelman, plans to use the cash for marketing in Birmingham, where it hopes to prove its model can deliver ahead of a second larger funding round for a city-to-city expansion.

A possible IPO is on the table as one fundraising option, as well as returning to the crowd or securing private investment, said Petre Norton, head of Bergen’s UK office and Appetise non-executive director. If successful, the campaign on Crowdcube - giving away a 16.6% stake - would value Appetise at £2.5m, but Norton added the next round would be at a higher valuation once the concept was proven.

“Half a million is not enough to compete with Just Eat, but the point of this funding round is to grow revenues to show the concept works and we are able to generate orders,” he said.

Bergen acquired the business, founded by three students at the University of Warwick in 2008, in 2016. The fund manager brought in Edelman, former Arsenal MD, ex-chairman of Revolution Bars and current non-exec at SuperGroup, as chairman, and Konstantine Karampatsos, former commercial director of TheFoodMarket.com and head of e-commerce at Play.com, as CEO to professionalise operations.

“Just Eat’s monopoly gives it a huge pricing power, which is a good thing for investors, but it does provide the opportunity for a lower cost player,” Norton said.

The UK takeaway market was worth £6.9bn in 2016 and is forecast to grow to £7.7bn by 2020 [Euromonitor]. However, Appetise said online penetration was still less than 50%: “Even without taking market share there is a £3bn and growing addressable market.”Just Eat’s market value has more than tripled to £5.4bn since it floated in April 2014 as online food ordering has surged across the UK.

Shares hit highs of more than 800p last year when its £200m takeover of Hungry House secured the green light from the CMA.Revenues jumped 47% to £138.6m as total UK orders soared 22% to 26.2 million in the third quarter to 30 September 2017.”The duopoly in the UK, with Just Eat and Hungry House dominating, has eroded the value-for-money proposition for both customers and restaurants and created an opportunity for Appetise,” the Crowdcube pitch said.

Appetise hopes to become an potential acquisition target for an overseas rival looking for a beachhead investment in the UK or a buyout by Just Eat. Sales at the new rival are expected to total just £131k in 2018 but grow to £9.8m in 2023, with profits not forecast until 2021.

“From 2016, we focused on improving the platform and concentrating our restaurant base in Birmingham,” Appetise said.

“As a result, revenues have been modest but we believe this work has put us in a strong position for an aggressive marketing push to expand rapidly to other key regions and grow revenues with our ultimate target being an exit via IPO.