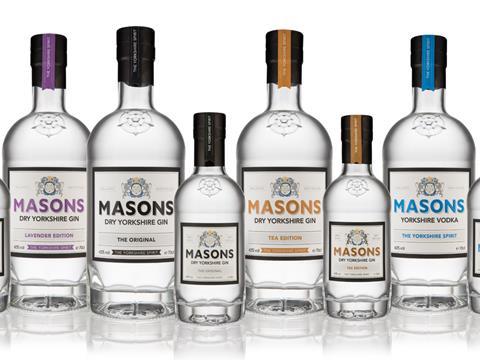 Masons Yorkshire Gin has agreed a £300,000 investment from two well-known Yorkshire food and drink entrepreneurs to help the startup capitalise on the craft gin explosion and win more supermarket listings.

James Lambert, founder and former CEO of R&R Ice Cream, and Richard Page, Inspired Pet Nutrition MD, have each taken a 10% share for their £150,000, with the money to be spent on marketing.

Lambert is the founder and former CEO of Yorkshire-headquartered R&R Ice Cream, which expanded to become the second largest ice cream manufacturer in Europe and largest private label supplier in the region under his leadership.

Gin enthusiasts Karl and Cathy Mason formed Masons Yorkshire Gin in 2013, launching the business on World Gin Day. Annual sales soared to £1.2m by the end of 2016, with growth in triple figures since launch.

The range of gins, which include unique flavours such as lavender gin and tea gin, are is stocked in more than 100 independent stockists across the UK and the business recently secured a listing in Morrisons, along with Booths and local Waitrose stores. It is also sold in Italy, Switzerland, Denmark and the Seychelles. “The experience James and Richard have brought has been second-to-none,” Karl Mason said. “They have been instrumental in advising on dealing with the larger retailers, and they helped on the Morrisons deal. We are now working on a definitive strategy together as we aim to win more listings with the multiple retailers.”

The investment by Lambert and Page will also be used to buy equipment for new premises as Masons has run out of distilling capacity at its current location Bedale home. “Cathy and I have been delighted to achieve triple-digit growth for the past three years,” he added. “And with the focus James and Richard have given us, we aim to keep this rate of growth for at least another 12 months.”

“If I can easily find Masons Gin when on holiday abroad then I’d feel like we had really created something in this small town of Bedale - where co-incidentally James previously created Europe’s largest ice cream company.”

The drinks industry declared 2016 the ‘year of gin’ as annual UK gin sales rose 16% to smash through the £1bn barrier, with about 40 million bottles sold, according to the WSTA. HMRC confirmed 45 new distilleries were registered last year, bringing the total number of distilleries in the UK to over 270 - up 135% since 2010.

Page said: “Masons has made incredible progress over the past three years building up a truly world class craft gin range. The craft gin market is still in an exciting growth phase, and the success of Fever-tree continues to demonstrate the widening demographic movement to support an ever higher quality of gin and a consumer prepared to experiment with more and more exciting flavours.

“When Karl and Cathy explained their vision to James and I of taking their craft gin, with a focus on quality and regional North Yorkshire credentials, to the top shelf of the major multiples in the UK, and ultimately abroad, it was a very easy decision to support them.

“James and I have both been involved in fmcg businesses across ice cream, pet food and biscuits for many, many years and hope that our experience can provide some additional support to an already successful business.”