How should UK meat producers respond to the rise in plant-based eating? 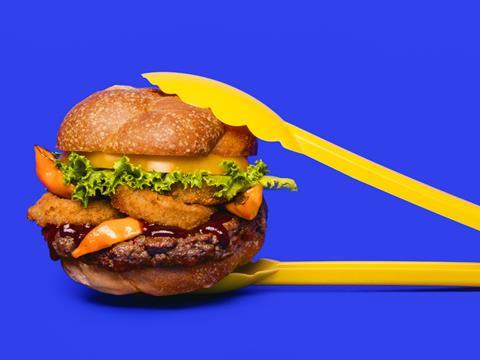 A new generation of meat alternatives, such as the Impossible Burger, is challenging meat consumption

The meat industry is facing unprecedented disruption from plant-based alternatives. Only this week, to coincide with National Vegetarian Week, Tesco and Waitrose announced further expansions of their vegan and vegetarian offerings. These included listings for a new plant-based steak from Dutch supplier Vivera in Tesco (p39) and a raft of new lines as well as a new dedicated vegan fixture in store for Waitrose.

At the same time, the ethics, sustainability and health credentials of the meat industry are under growing attack. Campaigners and a slew of high-profile documentaries (the latest, the Natalie Portman-produced Eating Animals, is set to hit cinemas in June) are encouraging consumers to ask probing questions about meat and cut down consumption.

In a recent survey for The Grocer by Harris Interactive, 25% of UK shoppers said they were looking to cut down their meat intake in the next 12 months; for 18 to 34-year-olds that figure is as high as 35%.

So how should the meat industry respond to these challenges? To find out, The Grocer teamed up with research specialists England Marketing for an exclusive project to gauge industry sentiment on the rise of plant-based. Industry stakeholders – from retailers and farmers to processors and industry bodies – participated in in-depth interviews, covering everything from communication to collaboration.

”It is notable that there is some significant work going on amongst industry leaders who have taken the rise in plant based eating very seriously,” says Carolyn Hudson, project manager at England Marketing.  ”We know that health and well-being is being taken seriously by many consumers and plant based eating sits well with that.

”However what is striking about this research is that there are some interesting contradictions: The rise in childhood obesity continues, there is a heightened desire for more protein, and an appetite for even more fast food and food-to-go. Meanwhile we seem unable to meet the recommended daily intake of five a day which has remained virtually static, at around 3.5 portions in the UK, for a number of years. Set this against the reported rise in plant based eating and you realise there is someway to go before we can predict exactly what next.”

Here are the key themes that emerged from the research.

Although most respondents say the trend is not yet a threat to their businesses, they agree the industry cannot be complacent. “As a beef producer, it will have a knock-on effect if it continues,” says one respondent. Another producer adds: “It’s not doing us a lot of good, but I think it’s more fad than a fact. However, if it continues, it may have a marginal impact on our business.”

Jane King, CEO of AHDB, stresses action is needed. “The meat trade needs to respond by reviewing its offer to consumers,” she says. However, she is less than convinced of meat companies’ ability to be agile in the face of the plant-based trend. “They won’t make the leap,” she says. “New types of businesses will innovate. The meat companies’ culture is old school, wanting to make as much money as possible.”

The long-term significance of the trend remains to be seen

“Current consumer interest in plant-based eating is still low,” says Richard Cattell, head of communications and marketing at Red Tractor Assurance. He adds household penetration for meat remains at 91% and only 0.1% of buyers left the meat, fish and poultry categories in 2017.

In Depth: Is the meat-free trend more than a fad?

Robust insight on changing consumer behaviour is therefore key, as producers in particular worry the public debate about plant-based is over-hyped. “The industry needs to understand the scale of the challenge,” adds Andy Richardson of the Protein Challenge 2040. “That is by far the greatest issue right now.”

The meat sector must get better at communicating

“The meat industry is doing a good job, but it’s not communicating it well,” says Caroline Drummond, CEO of LEAF. “The younger generation is very interested in food. We need to get the facts to them, so they are well informed and stay engaged.”

“The industry needs to come together and fight its cause, underpinnned by better communication from the NFU, the CLA and AHDB Beef & Lamb,” says one producer. “They have massive marquees at big events to serve coffee to those who wear monocles and cravats. It’s all talk; these people aren’t up at 4am lambing and calving.”

But not everyone agrees on what the message should be

While producers are keen on a bullish, pro-British campaign, others see a need for a more nuanced message. “There is too much in the farming press about how great we are,” says one national retailer. “They need to be crystal clear on why we are great and what it means. There is too much propaganda.”

Another respondent also stresses the need to listen to consumer concerns rather than simply broadcasting an industry message. “The industry seems to think consumers need to understand their industry. But other sectors aren’t like this. The industry need to listen, not try to convince people.”

Phil Stocker, CEO of the National Sheep Association, agrees the industry must listen more. “There is a need to be trusted,” he stresses. “Agriculture has created a mystery around the industry. It’s become a bit un-transparent and disconnected. It’s not been good at listening to the public.”

There needs to be more clarity and collaboration on comms efforts

‘It’s everyone’s job’, is a common refrain but provides little tangible insight into who should actually do what. “It’s an impossible question,” says the national retailer. “It should not be the government. The levy bodies should be responsible for marketing the products, but there need to be innovative solutions so that the industry is more competitive, and retailers are then in a position to get the message across to the customers.”

Drummond at LEAF sees a need for “a cracking good pilot project” across the industry to kick things off. “The government should take a leadership role, with a policy infrastructure across Defra and the departments of health, education and industry,” she adds.

“What we need is more shared objectives amongst existing bodies, not the invention of new ones,” agrees Cattell at Red Tractor Assurance, while one producer adds: “Get together with a plan and one message. This should include the anti-meat representatives, so they can be educated. My message would be ‘let’s talk’.”

There are opportunities as well as threats

While total volumes could come under pressure, several respondents see an opportunity to drive consumers towards higher-value options. “Consumers are looking for higher quality and now are having more substantial portion sizes, though they are limiting their intake by having meat less frequently,” says Russell Parsonage, managing director of Russells of Smithfield. “When they decide to have meat, they are looking for more premium meat.”

Another industry respondent agrees: “It’s an opportunity because people will think about what they are eating, based on animal welfare.”

Stocker at the NSA sees particular opportunities for lamb producers. “Sheep can contribute to the welfare debate,” he says. “Green, sustainable, mixed farming is very good for the environment.”

The national retailer also strikes a positive note: “We are creating more vegan and vegetarian products. We are reacting to what customers expect. It’s not a threat, more an opportunity.”