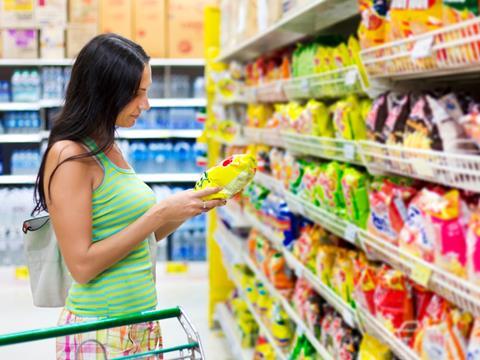 The new Change4Life campaign is being aimed at parents, urging them to choose more healthy options for their children

The food and drink industry has begun 2018 facing a war on snacking, after PHE launched a major new campaign backed by supermarkets to reduce children’s calorie intake.

The Change4Life campaign, including the new message ‘Look for 100 calorie snacks, two a day max’, is being aimed at parents to stop them buying products like ice creams, crisps and pastries for their kids.

Today Tesco launched in-store activity in support of the campaign, to encourage parents to swap such snacks for products like fruit, as part of what it said was a wider move to encourage healthier eating. The Co-op has also signed up to back the PHE drive.

The body said half of children’s sugar intake came from unhealthy snacks and sugary drinks. Every year children consumed almost 400 biscuits; more than 120 cakes, buns and pastries; about 100 portions of sweets and nearly 70 of both chocolate bars and ice creams, it said.

It described how this was “washed down with over 150 juice drink pouches and cans of fizzy drink”.

On average, PHE said children were consuming at least three unhealthy snacks and sugary drinks a day, with about a third consuming four or more.

“The true extent of children’s snacking habits is greater than the odd biscuit or chocolate bar. Children are having unhealthy snacks throughout the day and parents have told us they’re concerned,” said PHE chief nutritionist Dr Alison Tedstone.

Tesco said it was throwing its weight behind the PHE campaign as part of a wider approach to help colleagues and customers tackle obesity.

Following last year’s Little Helps to Healthier Living campaign, which saw the retailer encourage shoppers to switch to lower-sugar products in categories such as cereals, it said it would be helping parents in store and online find healthier products that were 100 calories or less.

It is also flagging up its partnership with SpoonGuru, which allows customers to find 130 healthier snacks containing 100 calories or less online.

“We know that our customers want us to help them eat more healthily and it can be particularly difficult to encourage children to eat healthy snacks,” said Tesco UK and Ireland CEO Matt Davies.

“By promoting a wide range of snacks, aligned with Public Health England’s campaign, we hope to make it easier for families to make a healthier start to the year. This is part of a wider programme to help our colleagues and customers stay healthy.”

Health campaigners welcomed the campaign and urged the government to take further action.

Action on Sugar chairman Professor Graham MacGregor said: “The findings about children’s daily sugar intake are shocking and need to be a stark reminder to the government that we urgently need a revised and robust childhood obesity strategy.

“Tactics need to include mandatory product reformulation, clear front-of-pack colour-coded labelling and a ban on promotions on foods and drinks high in fat, salt and sugar, as well as tighter restrictions on marketing and advertising, which hugely influence children’s food and drink preferences.”