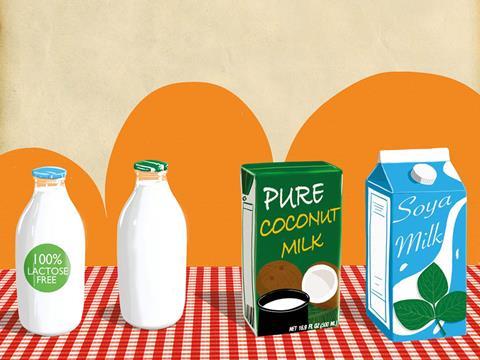 Sales of dairy alternatives may be booming, however consumers of the drinks may be at risk of iodine deficiency, new research by the University of Surrey has suggested.

In the first study of its kind in the UK, published today (26 September), researchers from the university examined the iodine content of 47 dairy alternative drinks (including soya, almond, coconut, oat, rice, hazelnut and hemp - but excluding those marketed specifically at infants and children) and compared them with the iodine content of cows milk.

The Dairymen digital special: Do Brits think dairy is scary?

The study, which received no funding from the dairy sector, found that the majority of dairy alternative drinks did not have adequate levels of iodine, with concentration levels found to be about 2% of the iodine content found in cows milk.

Iodine is required to make thyroid hormones, and is particularly important during pregnancy as it is essential for normal foetal brain development. Previous research in this area by the University of Surrey has shown that low iodine status in pregnant mothers was linked to lower IQ and reading scores in their children.

“Many people are unaware of the need for this vital dietary mineral, and it is important that people who consume milk-alternative drinks realise that they will not be replacing the iodine from cows milk, which is the main UK source of iodine,” said Margaret Rayman, professor of nutritional medicine at the University of Surrey.

“This is particularly important for pregnant women and those planning a pregnancy,” she added. “A glass of a milk-alternative drink would only provide around 2mcg of iodine, which is a very small proportion of the adult recommended iodine intake of 150mcg/day. In pregnancy, that recommendation goes up to 200mcg/day.”

The research comes at a time when more than a third of young adults aged between 16 and 34 admit to reducing their dairy intake for health-related reasons [The Grocer Dairymen supplement/Harris Interactive], and as the dairy sector faces an onslaught from vegan campaigners.

Dr Sarah Bath, dietician and University of Surrey lecturer in public health nutrition, added: “Milk-alternative drinks are increasingly being used as a replacement for cows milk for a number of reasons that obviously include allergy or intolerance to cows milk.

“Worryingly, most milk-alternative drinks are not fortified with iodine and their iodine content is very low,” she added. “If avoiding milk and dairy products, consumers need to ensure that they have iodine from other dietary sources, where possible.”

The study was welcomed by Dairy UK CEO Judith Bryans, who said iodine deficiency was becoming “a public health concern” in the UK.

“This research from the University of Surrey is a welcome addition to the body of evidence highlighting the nutritional value and importance of dairy’s nutrient package. Iodine is important for the growth and development of a baby during pregnancy, and for children too,” she added.

“A glass of milk can provide a pregnant woman with around 44% of the UK’s recommendation for iodine. Nutrient-rich products like milk and yoghurt are cost-effective, tasty and accessible sources of iodine, as well as a source of other key nutrients like protein, calcium and B12. The nutritional credentials of dairy are clear, so let’s trust the science.“