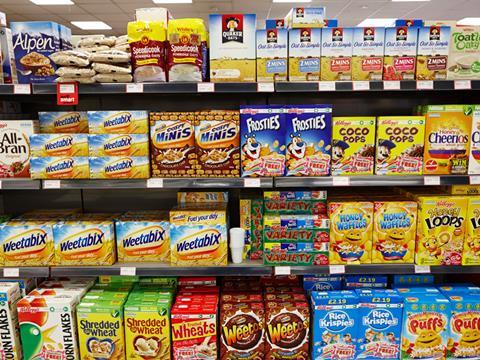 Nestlé, whose cereal lineup in the UK includes products such as Shreddies, Shredded Wheat and Cheerios, is committed to making them healthier by cutting sugar content

Nestlé has committed to a 10% cut in the average sugar content of its UK cereal products by the end of next year.

Nestlé said the change to its breakfast cereals, manufactured by Cereal Partners Worldwide (UK), would remove the equivalent of 225 million teaspoons of sugar from the nation’s diet.

It follows talks between food and drink companies and Public Health England (PHE) that in March resulted in reformulation targets across key categories.

These included cereals, in which suppliers have been urged to cut sugar by 20% to an average of 14.6g per product by 2020, with a size cap of 400kcal.

Nestlé, whose cereal lineup in the UK includes products such as Shreddies, Shredded Wheat and Cheerios, said its changes would be achieved through a combination of reformulation and by growing the share of lower sugar variants in its lineup.

Since 2010, Nestlé Breakfast Cereals in the UK has already reduced its average sugar content by 15% across the portfolio.

In March, Nestlé announced it would will take 10% of the sugar out of its confectionery in the UK and Ireland by 2018, although it has also warned the government needs to do more to tackle the out-of-home sector’s contribution to sugar intake, which it claims will need regulation alongside voluntary reformulation.

“We believe breakfast is the most important meal of the day and our cereals provide vitamins, minerals and fibre to the diet,” said Gharry Eccles, UK regional vice president of Cereal Partners Worldwide. “We also know that breakfast cereals can play a part in the efforts to reduce sugar consumption across the nation.

“Offering consumers healthier and tastier cereals is one of our top priorities and we are determined to make breakfast even better for everyone.

“We’ll take every opportunity to drive forward improvements across our range. For example, by the end of this year, our cereals will be free from artificial flavours and colours across our entire product portfolio. Making these improvements is crucial to us offering better choices for our consumers while retaining the same great taste.”

Alison Tedstone, chief nutritionist at Public Health England, added: “This is a major step from Cereal Partners and a good sign of its commitment to reduce sugar in Nestlé breakfast cereals. While there is a long way to go to drive sugar consumption down to recommended levels, we believe this announcement will encourage other companies to make significant reductions and produce healthier products to meet the government’s 20% target by 2020.”