Lidl to create 300 jobs with five new stores across Scotland 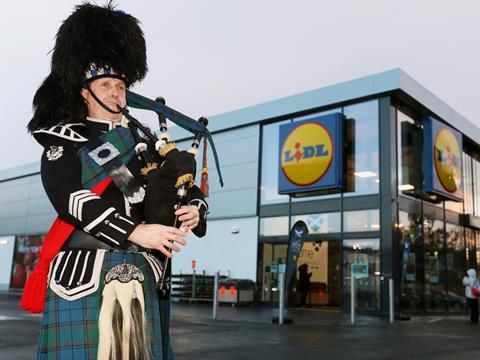 Lidl is to create 300 jobs with new stores across Scotland

Lidl is set to create 300 jobs by opening five new stores across Scotland over the next 18 months.

The discounter has announced plans to recruit up to 40 new staff for each of the planned stores in Paisley, Dumbarton, Giffnock, East Kilbride and Edinburgh.

An additional 100 people will be recruited at a new regional distribution centre at the Eurocentral industrial estate in Holytown, North Lanarkshire.

Vacancies to be filled include operations, maintenance, logistics and office support roles. A further 250 jobs will be created as the warehouse reaches full capacity, according to the supermarket.

Ross Millar, Lidl UK’s regional director for Scotland, said the retailer was “delighted to be in a position to create new jobs and welcome even more colleagues into the Lidl family”.

“We strongly believe in investing in our people, which is why we offer market-leading pay, great benefits and extensive development and training opportunities, and urge anyone interested in working with us to keep an eye out for jobs on our careers site.”

Lidl is also in the process of refurbishing and extending many existing Scottish stores as part of a modernisation push. Glasgow, Motherwell, Aberdeen and Ayr are the first earmarked for extension.